Not only have I had the opportunity to test dozens of strollers in my seven years as a parent and in the last three as a product reviewer, but during that time, I’ve owned four — yes, FOUR! — UPPAbaby VISTA strollers.

The first one came in 2009 after we’d had a disgruntled year with a Phil & Ted’s stroller. But when the 2010 model came out, there were enough significant changes that I sold the one we had to fund the new one.

I spent a lot of time with that stroller and it remained an imperfect favourite for years, and is still one of my most-read posts of all time.

And yet I had to part with it. My daughter was a toddler who was simply having none of reverse tandem strolling (which was the only double-stroller option for the VISTA back then), so we sold our beloved VISTA to invest in a side-by-side option.

Fast-forward to 2013 when I was hired to write a “best-of” baby-gear guide for Canadian Family, and I had to test all of the current single, umbrella, convertible and double strollers on the market to determine a top five in each category.

The VISTA easily made it into one of the top fives, even if there were still lots of changes I had hoped would have been made in the more than two years since I’d parted ways with ours. And with the piggyBACK “skateboard” that we added onto the back, foregoing the Rumble Seat, the VISTA again became the best stroller for that stage of my kids’ lives.

Then I got an email.

It read like a romance novel to me, touting the remarkable improvements that UPPAbaby had made to the 2015 VISTA. And it wasn’t just one or two changes; it was change after incredible change, resulting in what looked on paper like the elusive perfect stroller.

Thanks to UPPAbaby’s Canadian distribution team over at 5514km, I’ve had a chance to give the 2015 UPPAbaby VISTA a good whirl. 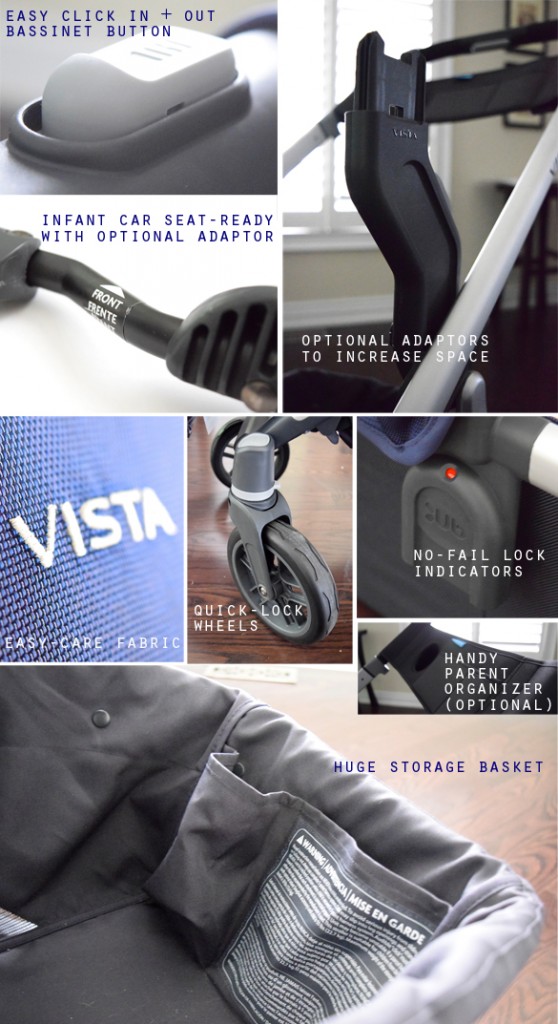 I’m going to start with this: throw out everything you thought you knew about the VISTA up ‘til now. The 2015 model is so entirely different from all previous models that it probably deserved to be totally renamed.

Next, I want to say THANK YOU to UPPAbaby for listening to its customers. You heard us. And the changes reflect a brand that is sincerely committed to creating the best stroller experience for parents of one, two or three children. (If only you could nail that cup holder…see gaffes.)

One of the best parts of the re-imagined VISTA is that the best of what was already there is still there: the fully upright, high off the ground seating; the smooth and flat recline; the huge SPF 50 canopy; the massive storage space under the seat; the unpoppable tires; the generous telescopic handle; a beautifully designed bassinet (included in your purchase price, no less) that’s actually approved for sleeping; turn-on-a-dime steering; the convenient foot brake; and the same great customer service to which we were accustomed.

Now, let’s discuss some of the major improvements… starting with the VISTA’s fold. Now, the old fold was certainly doable, but you needed to get used to it and you always felt like you might just break it one day because of the folding mechanism. The new fold is similar to the one found on the Mountain Buggy Duet, which up until now was – hands down – my favourite fold on any stroller. Anywhere. The VISTA’s easily rivals it and folds more compactly than it used to as an added bonus. You can also much more easily fold the VISTA with the seat on (forward or backward), and — although it’s a bit awkward — you can even fold it with both seats facing forward.

The multiple configurations available. Between an infant seat, bassinet, main seat, RumbleSeat and piggyBACK board, you used to be able to do a few configurations that made life with more than one child easier than with just a single stroller. But UPPAbaby clearly thought this one through for the 2015 revamp and, well, WOW. Now you can be the parent of twins and cart both of them around in the same stroller at the same time, both in bassinets or infant seats. Can you believe that TWO bassinets now fit on one frame? You need to add upper and lower adaptors to help create more space, but it’s a remarkable feat to be able to configure two really well-sized bassinets on a single stroller frame and still feel like you can push it with ease.

Forward-facing double stroller capability. As if the configurations noted above weren’t enough, parents of kids not as close in age as those with multiples will find that the ability to have two children forward-facing in the main and RumbleSeat is a hugely welcome change. There’s really nothing less than a baby older than, say, nine months wants to do than look at your face while out for a walk. He sees you ALL day! She craves adventure! Mine were so much happier facing out as they neared toddlerhood, and the 2015 VISTA allows you to choose which direction your kiddos face. You can even have them facing each other!

The front swivel wheels. Another important improvement, even if you think it sounds too minor to be noticeable. When you live in Canada and the season can change three times in one day, being able to quickly, reliably and consistently lock the front wheels if it snows is a must. The old front wheels were often a pain to get or keep locked – or the other way around. These ones, with the press of a button, are a snap. And they work every time.

The RumbleSeat. A seat that used to seem like nothing more than a simple convenience and designed as an afterthought to the rest of the stroller system, the new RumbleSeat is anything but an afterthought. Aside from being newly coloured to match the rest of your set (instead of plain black as in years passed), its functionality is greatly improved with the ability to recline and offer the same sun protection as the main seat. The new design also means you don’t have to take up your glorious storage space with kid feet like the old one did because it can face OUT and has a foot rest! It might be an illusion, but I also feel like the seat itself is bigger.

The frame. It’s lighter, which means that if you’re the type of person who removes the seats before folding and loading into your car, you’ll notice a difference; if you’re lazy like me and never want to detach the seats, you probably won’t.

The bassinet (see image on right). It’s beautiful and functional, and although it can only handle up to 20 pounds of baby, it’s also the only approved bassinet on the market for sleeping because the pad is aerated. There’s a lot of breathability, which is ideal for safer sleep. It also has a zip-off liner and pad cover for easy washability.

I’m not going to address the $925 (Canadian) price tag in the gaffe section as I often do with bigger-ticket items. Because it’s worth it. For previous models, I’d probably caution you. But the 2015 UPPAbaby VISTA barely went up in price despite the enormous R&D costs that the company probably invested getting it to this point. And it shows such longevity that the cost-per-use wins with this stroller, every time.

The other point I’d like to address is that, no, you can’t look for used RumbleSeats and piggyBACK boards for your 2015 VISTA — they don’t fit. This is neither a pro or a con. It just is.

Overall, the new VISTA creates a real one-stroller-for-life option that parents could actually stick to. That is, unless you have triplets (or more!) or end up with more than three kids under, say, age four.

Ideally, the RumbleSeat would hold closer to 45 pounds. But I make big babies so maybe this is not a universal feeling.

I prefer the softer, neoprene padding on the old bumper bar. That said, the new one is easier to wipe clean.

Cup holder.  This has been my pain point with the VISTA over the years. The early cup holders were a total joke, and did see some improvement in recent years. But it still fell off every time you put the stroller in the car, and I still lost both of the ones I owned. Not only should a cup holder be included (and not an option available for another $25 after you’ve spent close to a grand already), but it should work flawlessly. UPPAbaby’s G-Luxe umbrella stroller has the perfect cup holder, so I know it’s possible. UPPAbaby: just do what you do with the G-Luxe, k?

Colours. In the past, the VISTA’s available colours have been amazing; bold reds, vibrant pinks, shimmery greys. They seem so much more muted now and not as fun as they’ve been before.  (Dare I say that UPPAbaby’s erred on the side of gender neutrality?)

Upper/lower adaptors not included — they’re an extra $20 per set. Again, once you’ve spent more than $1,000 after our lovely Canadian taxes on a stroller, I feel like anything extra that’s integral to the full functionality of said stroller should be included with your initial purchase. Having to spend another $40 to create the space required to comfortably manage all of those cool, new configurations is a bit crappy.

I wish UPPAbaby would unbundle the VISTA so parents could purchase it without the bassinet. Don’t get me wrong – I love that bassinet and used it with both of my children. But with a 20-pound weight limit, you honestly don’t use it for long. (In fact, if you’re my children, you were busting out of it before the first month was up.) It would be great for parents who need it or desperately want it to buy it, separately. This would allow parents who see longer-term value to get more out of their investment by purchasing a RumbleSeat (which at around $240 before tax would probably be pretty close to the value of the bassinet on its own).

I’m no engineer, but I don’t understand why the adaptors can’t all be designed like the upper adaptors, which are by far the easiest to get on and off the frame. It seems to me that you could, with a better design, omit the Rumble Seat and lower adaptors completely. Why not have a “click-in” stystem like you do for the main seat that can be used with the RumbleSeat and all of the alternatives that are available for the lower level? Even if you need the extra space that the lower adaptors may provide, at least this kind of design does away with one set of extra adaptors.

Interested in seeing a video review that also contains some helpful hints for assembling and configuring your new 2015 UPPAbaby VISTA? Well, here you go (warning…it’s a rather thorough 17 minutes long):