A funny thing happened the other day.

I moved our old Mac desktop to a kid-sized desk in our play room. Miss Q, now two, beelined for it and – intuitively and immediately – ran her tiny finger across the screen. She didn’t touch the keyboard or inspect the mouse. She made an unmistakable tablet-worthy swipe.

It reminded me of the first time her brother, also two at the time, played with our then-new iPad. It was a toddler drawing app and, amazed at the purple brush stroke he’d created, lifted his finger from the screen and stared at it, very clearly wondering how the purple got out of his finger.

When I think about the SMART Board technology that’s in most schools now and the sheer number of tablets available for kids, I can barely believe that I’ll be telling stories about typewriters and – probably – keyboards. (I feel super-old writing that.)

While we have a lot of Angry Birds action happening in our house these days, we try to balance it with educational activities. And one sure-fire way of getting the kids to practice colouring in the lines or trace letters is with a tablet.

One such tablet is something called the ViNCi Tab, an early learning tablet we were loaned to review.

The ViNCi is safe; there will be no accidentally landing on a YouTube parody of the Wiggles that has your toddler looking at you quizzically as they turn into swearing metalheads. No ads in the apps. No content that is questionable in any way.

Intended for kids as young as 18 months, and with curricula suitable for nine year olds, this tablet is intended to grow with your child.

Progressive learning modules mean that your kids can build on skills they learned earlier.

Assessments mean that you can measure those skills along the way. You can even track your child’s progress online, though I did not try this myself so I can’t comment on its functionality. 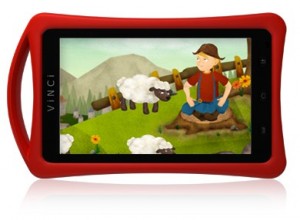 The smaller ViNCi Tab II M (which I prefer) has a clear picture and is sized for little hands, complete with its own handle. It also has a silicone sheath protecting every side and corner. The larger Tab II’s design makes it easy for kids to carry around.

The ViNCi comes with a rechargeable battery and a wall/USB charger – this is a bonus if you’re comparing other kid-friendly tablets, like V-Tech’s InnoTab 2 or the LeapPad2 Explorer that suck alkaline batteries like a hungry newborn lest you buy the power cord on top of the hundred or so bucks you just spent for the device.

I completely love the fact that you can turn the WiFi off. There’s a lot of concern about the negative effects of WiFi on kids’ brains, and no matter what the actual scientific evidence says right now, you will never trump the fears of parents who’ve heard first-hand anecdotal evidence. So if you’re anti-WiFi, shut it off.

From body parts to instruments to teaching kids the concept of faster versus slower, there are some good apps. There are also interactive story books (some are better than others). And because it runs on the Android system, you can apparently download free apps; we never did because we have an iPad and I wanted the ViNCi to remain purely educational.

Despite all of its many issues (see below), the ViNCi Early Learning Tablet does entertain our kids and their friends. They get over any frustration pretty quickly, and play with it for as long as they can before it needs to be recharged.

I’m going to start this section by telling you that when this tablet first arrived and my kids started playing with it, they were smitten. They wanted to play with it more than the iPad. We expected that it would supersede the iPad in their eyes. I thought so highly of it that I added it to my 2012 Holiday Gift Guide. And then, out of nowhere, our beloved ViNCi went kaput. We went through two tablets before we got one that worked properly. Now, the customer service was remarkable; the company will email you a FedEx waybill that you affix to the defective tablet and FedEx comes to your door to pick it up. Then they send you a new one. Or, in our case, two new ones. Our tablet, however, has just gotten worse over time, and if we’d had this experience with it before I put together my gift guide, I certainly wouldn’t have included it. In fact, I’ve been putting off writing this review in the hopes that if I just charge the ViNCi one more time, maybe it will wow us like it first did.

Buying the ViNCi feels a bit like an exercise in buying a new razor. There’s this great package that comes with a nice set for a pretty decent price. But when you need more razor blades – or, in this case, more apps – you’re gonna pay. Big time. Up to $179.99 for one curriculum at full price. On top of the price you paid for the device (at a minimum, $129.99 if you catch a sale), this would be a challenge for many families.

Boot-up time is long. It reads that it “can take up to a minute” but in many cases it takes far longer. 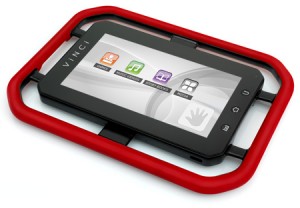 The “female part” on the tablet (on the Tab II 7″ model) that you need to access to plug in the charger is ill-placed. It’d be one thing if you only had to charge it a couple of times a week…but…

Battery life sucks. Like, really sucks. And the manual instructs you not to use the tablet while it’s charging, so that takes it out of commission quite a bit. The company website promises eight hours, but there is absolutely no way we’ve ever gotten that much out of one charge. Ever.

The picture on the ViNCi Tab II seven-inch screen seems stretched compared to the five-inch Tab II M screen. This size also doesn’t have the silicone protection around the actual screen, so I’m not convinced that it wouldn’t be destroyed if dropped.

While the touch-screen response is superior to its V-Tech and LeapFrog cousins, it still doesn’t match the likes of an iPad or BlackBerry PlayBook. I’ve found the kids frustratingly jamming their finger at the screen numerous times.

Some apps have a tendency to crash. Some while you’re in them and others before they even open.

There’s a camera and a camcorder, but they’re as inferior as those offered on the InnoTab2 and LeapPad2. Fine for kids just messing around but nothing you’re going to be devastated about losing if your kid hits the delete button.