It’s one of the only things I can’t  quite figure out how to help my kids master. No matter how much we practice, this skill eludes Miss Q and The K Man.

Don’t get me wrong, they have their moments. Some days, I’ll be preparing a meal and look over my shoulder to see them both standing leaning over the couch with a book or a tablet – together, nicely. Those moments are much more heartwarming than the ones involving biting, hitting and yelling.

We have been on a PTPA toy-evaluating spree lately, and the VTech Alphabet Activity Cube is one of them. 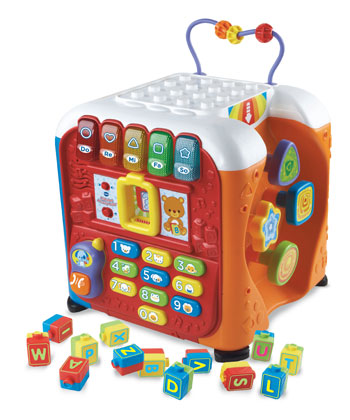 There are FIVE sides to this cube and it’s probably going to hold your baby’s or toddler’s attention for a good chunk of time. There are lights, colours, numbers, music and animal sounds. There’s a phone – and a ringing sound, at that. There are things that flip and slide. One side has a “peg maze” of shapes and reminds me of the Plinko game from The Price is Right. And best of all, 13 blocks with the alphabet on them; when placed into a little nook, the letters are read aloud. It all works together to create fun-filled edu-tainment.

The VTech Alphabet Activity Cube is a sturdy toy – no kid is knocking this thing around. Miss Q, who is generally a rather aggressive little girl and not remotely as angelic as she looks, doesn’t even bother trying to push the Cube around. It’s one of the rare toys that stays put.

There’s a set of interlocking gears on one side. Mommy Gearest gears?! The K Man is fascinated with gear mechanisms, and these work so effortlessly that 21-month-old Miss Q can make them spin round and round and round.

It’s big enough that four babies could actually play on it at the same time – if you have four who have just learned to sit up and aren’t yet pulling to stand, cruising or – basically – going anywhere after you plunk them down.

There’s volume control (soft or loud) and an OFF switch. Gosh, how I love those off switches sometimes.

It passed through a roster of parent testers and sports the PTPA Seal of Approval!

Price. I can’t quite stomach $59.99 for this toy. And because I don’t put it in the same class as the Symphony in B., which retails for a full $10 less and can be used far longer, I think the Cube would have to be on for about half off to stop my head from spinning.

Even my four year old – who I have to say does actually enjoy the VTech Alphabet Activity Cube from time to time, though not as much as his baby sister – has trouble pushing the alphabet blocks into their nook at times. You really have the shove ’em in there. With a suggested age range of nine to 36 months, this mechanism needs to be reconsidered.

Although there’s a thoughtful storage spot for the alphabet blocks on the top side of the Cube, the darn things don’t really sit on their little pegs very well. I love the idea of built-in storage, so this is an important component for VTech to sort out. Because one quick swipe from Miss Q and every last block is flung in every direction. Have you seen the speed at which plastic cubes travel on hardwood? It’s astonishingly fast.

When I first saw the Cube, the first thing I thought was: “Ahhh, so much to do on so many sides – they’ll never need to share.” But (1) I don’t actually think that’s an entirely good thing , and (2)  inevitably, at least some of the time, they both want to do the same activity at the same time. Sharing is a learned skill, and as we take away those opportunities, we lose the ability to capitalize on them.