I’ve been writing a lot of really positive reviews lately. In many ways, it’s been great because I’ve had the opportunity to test out some awesome products and hopefully introduce you to new brands along the way.

It’s certainly easier to write nice things; it makes everyone happy, and you get a lot of love on Twitter.

When I was offered a review copy of W is for Wapiti! An Alphabet Songbook, I was pretty excited. We all know that I love taking my kids to music classes, adore many children’s CDs and that I’m a closet broadway star. My kids love music. But what they love even more than music is books, so the idea of getting a book with an accompanying music CD seemed like it would be a natural fit with my family.

Some review sites clearly state that they shy away from publishing negative reviews and that they’ll give a brand or company the option to pull the review completely rather than post something that isn’t glowing with unicorns and rainbows. Mommy Gearest is not that kind of site. I think it’s important to produce honest reviews – no matter where that honesty leads. 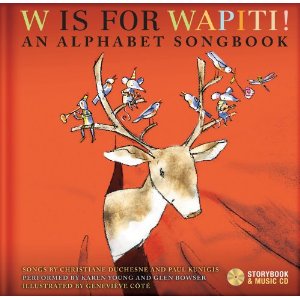 Priced at $22.95 for the hardcover book with CD (or just $12.50 if you want digital files and a printable PDF), the price point is reasonable.

The book itself is high-quality, with a nice, hard cover and thick, glossy pages.

The illustrations are lovely, which comes as no surprise when you learn that Geneviève Côté is a past winner of the Canadian Governor General’s Literary Award.

There are 24 original songs on the CD (or, 24 original poems if you consider it only as a book). This is almost unheard of for any CD, much less a kids’ CD.

W is for Wapiti! tries very hard to be whimsically educational. It wants to introduce interesting concepts to children, which is a good thing.

Oh, where do I begin…? I’m completely uninspired by any of the music on the CD. I played it the first night it arrived and listened to it – in bed, alongside Big B – and we kept waiting for a good, catchy song to play. It never happened. The next morning, I pulled out all my acting chops and asked The K Man and Miss Q if they wanted to hear “some great new music!” They were stoked and I thought perhaps if I listened to it with them and saw them engage with the music that it might change my initial opinion. We barely got through the first song, and my daughter, who usually dances along with just about any tune, lost interest and simply wandered off. (I think she went and pulled out every pair of pants from her dresser drawer but that’s another blog.) The K Man held on slightly longer and then asked if he could watch TV. Over the course of the next two weeks, I tried several times to encourage them to listen to more than just a couple of songs and each time I was met with complete disinterest. I can’t say I blamed them. 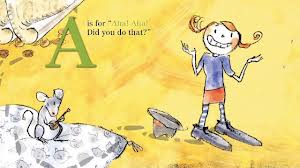 For me, an alphabet book should have some alliteration or be either (a) obvious or (b) quite clever about teaching the ABCs. But when the focus is the letter “A” and the only “A” is in the first line (“A-ha, A-ha, did you do that?”) and that’s it, I’m confused and left wanting more from an educational point of view.

I’m just not sure where the disconnect is. I mean, between the award-winning author – Christiane Duchesne, who’s written more than 60 children’s books – and composers and singers who have equally impressive CVs, you’d think it would just work. But it doesn’t. In many cases it feels somehow forced, like the lyrics were never meant to be put to music or that they weren’t written as a team. I honestly can’t put my finger on it. (And, believe me, I’ve listened to it over and over trying to find something that I love about it because I’m conscious of the fact that this is someone’s baby – people have worked hard on it, probably lost sleep over it and artistry is such an intensely personal thing.)

18 of the best experience gifts for kids, adventure gifts & unique gifts for friends
It's Justice for my tween this fall
Wordless Wednesday: Reebok goes super-cool for kids