I don’t attend very many events these days. I live a good hour from the city (and that’s without traffic) and that’s where they usually are. But when we were invited to an XBOX One S event last month, we packed up the kids without hesitation.

We are a pro-gaming family. Until now, though, the XBOX One S had been my domain. It has typically had more teen and adult content, so I wondered why the heck my kids were invited.

Well, this year XBOX is set to take on all competitor gaming systems because the amount of content appropriate for littles has exploded.

Then XBOX asked me if they could send me a console to write an XBOX One S review. But I already have one, I reminded them (that I personally purchased with my own real money, no less).

Ah, but do you have the limited Minecraft edition? Um, no. And when I looked it up, it was too cool to pass up. I’m going to tell you more about it and my thoughts on the XBOX One S in general, but first, you should know that if this is a system you’re considering, the limited-edition bundle is $150 off at Best Buy until Christmas Eve!

The limited-edition Minecraft bundle includes a custom designed XBOX One S console, a Creeper controller, full game download of Minecraft, and the Redstone Pack DLC. Don’t know what that is? Me either, but apparently it adds new, unique biomes and skins to the game. For the Minecraft junkie, like The K Man, the look is knock-your-socks-off-worthy.

It also comes with a vertical stand, which is something we always wished we had for our existing XBOX — because you can keep the console upright, and it looks pretty cool that way.

This particular console has one terabyte of memory, which is double what our current XBOX One S has (and that’s why we have the XBOX external drive as well).

If you’ve got older XBOX One systems, you’ll love that the One S is about 40 per cent smaller. It’s a really sleek-looking console.

Plus it’s incredibly easy to set up. I don’t even think we opened the manual. You simply plug it in, hook it up to your TV and play.

I read that there’s an integrated IR blaster, which means you can program the XBOX One S to turn on your other devices — TV, receiver, digital cable box — at the same time, with the press of a single button. Had I read the manual, we would probably have this set up by now…

The wireless controllers are super-intuitive. They’re comfortable in the hand, and even Miss Q’s tiny hands have no trouble with it. She doesn’t know it yet, but XBOX also sent her the pink Minecraft piggy controller. She’s gonna freak out when she opens it on her birthday. 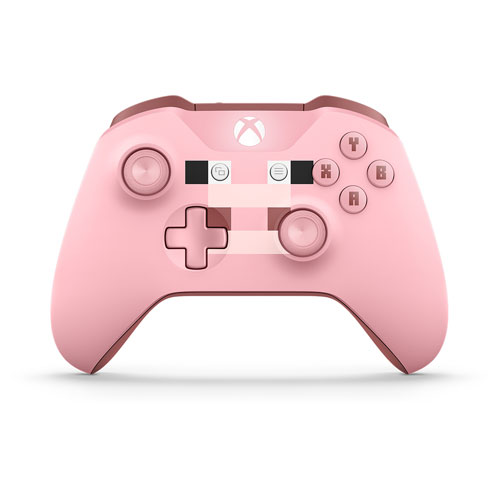 And that brings me to the games themselves. At the event, we tried lots of the new games. Miss Q, however, tried but one: LEGO Ninjago. And that’s because she didn’t leave the station for the entire 2.5 hours we were at the event! Needless to say, I bought that game for her birthday and will gift it to her with the new controller.

Buying games directly from your TV screen is frighteningly easy thanks to the built-in Microsoft store. Just don’t make the mistake I did recently and buy a game from your computer using an email address that isn’t the one you use for signing into your XBOX One S. Oops.

Let’s chat about a few more games that are perfect for the whole fam-damily:

After more than a year of owning an XBOX One S, there’s really only one thing that annoys me…which in and of itself is pretty impressive. When you have a physical game disc — rather than a game purchased online with a code — you have to put the disc into the console and download it. This is the same process as downloading with a code. Fine. But then every time you want to play that game down the road, you have to put the disc back in! I don’t understand this at all. If it’s already downloaded, why do I have to keep retrieving it and putting it back in to play?

The only other thing I think is worth mentioning, and this isn’t so much a gaffe at all as a head’s up, is that the 500GB XBOX One S will probably not have enough space for you to house all your games if both kids and adults in the house have their own games. Either upgrade to a 1 or 2TB system or add on some external memory, which is super easy.