Melissa is a Vancouverite with two kids (a girl, 4, and boy, 7 months) who says she lives in a tiny shoebox! (That’s Vancouver for ya, right?!)  A nurse by trade, she works casually as a prenatal instructor and takes care of families with high-risk pregnancies. That’s when she’s not on maternity leave, of course. She’s still trying to wrap her head around heading back to the workforce in three months. Melissa loves being silly at home or going out to splash in the puddles (there are a lot of those in Vancouver), and having friends and neighbours over. She also admits being very good at online shopping and slightly addicted to finding deals.

I’ve always thought the baby monitors that come with video functions are a bit “over the top,” perhaps reserved for anxious first time parents who can’t bear to separate themselves from their wee little bundle during nap time (when you get to baby No. 2 and beyond, you quickly learn to cherish these moments of separation and the anxiety really fizzles). I must say, however, that I was intrigued by the Yada Tiny Traveler Baby Monitor for Your Car, especially its claims to provide night vision. Seems like a bonus for us living in Canada with such limited hours of daylight during the winter, perhaps even more for families like mine who live in the perpetual winter gloominess of the west coast.

I was thrilled when I was selected to review this product because I knew with the holiday season upon us, there would be lots of driving around in the darkness for holiday events – so I could really test out this night vision feature.

For those of us who have a $10 mirror hanging from the headrest that allows you to glance at your baby through your rearview mirror while driving, we all know we can’t see our babes at nighttime.  Yet this is precisely the time I actually want to know what the LO is up to:  did he doze off like I hoped (or the opposite if I’m trying to keep him awake!)? 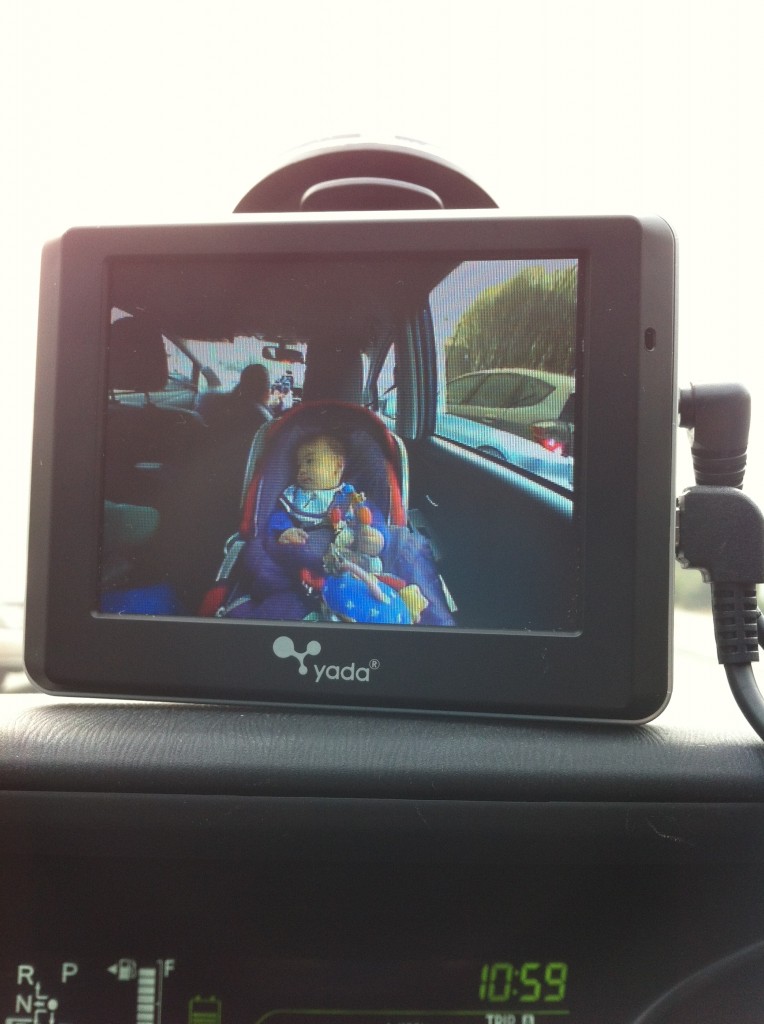 I struggle here to say something positive.  I sure am glad that we have our $10 mirrors in conjunction with rearview mirrors as a remaining option to see our kids in the back seat!  The only thing that the Yada Tiny Traveler monitor offers that is superior to the mirror is the night vision feature (but we’ll get to that).

The camera that faces your baby was relatively easy to install in comparison to the remainder of the system. You are offered two options:  a tether strap that you can use to mount the camera on the headrest, or if you don’t have a headrest, you can use a post that suctions to your side-door window. That said, the manual doesn’t recommended placing it on a window that can open. I also wonder if the post itself would stick out too far, either interfering with putting your baby or car seat into/out of the car or even prevent you from opening a sliding door on a van.  I didn’t bother testing out this post mount because it seemed obtrusive and the tether strap worked perfectly fine on our headrest.

I was frustrated trying to install the monitor. The most simple part of sticking the silly suction cup to the windshield took me the longest (I didn’t find the instruction manual very clear).  The unfortunate part is that after one car ride with the monitor on, my hubby and I decided it was a major distraction and decided to just keep it below in the middle console to peek at the monitor when we wanted to – and you don’t need the suction cup for that!

The manufacturer used a heavy-duty paper sticker to protect the display monitor.  When I tried to remove it, only the corners lifted, which left behind that thin papery, gluey residue.  I wasn’t sure how to remove it since the instruction manual specifically says not to expose the unit to water or other chemical products (so no Goo Gone action here!). I took my chances and carefully soaked it off with a damp paper towel. Phew. It worked, but this could have been solved by simply having the display monitor protected by a thin plastic sheath like every other electronic device these days. 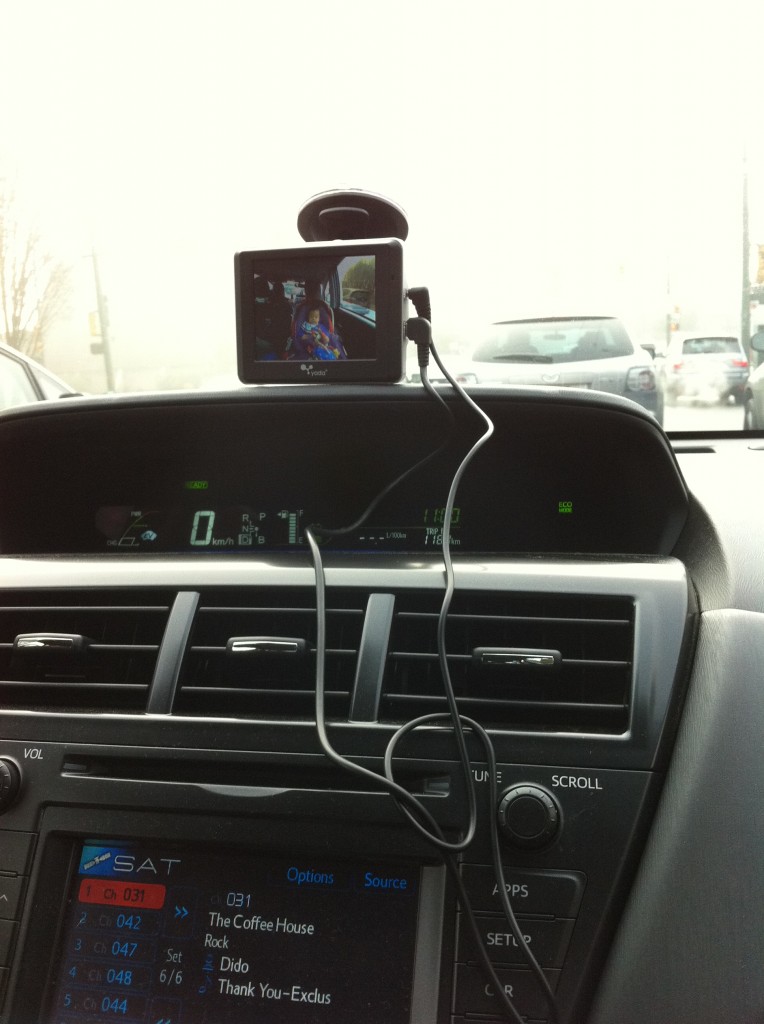 Installation and the wiring. If you’re going to keep Yada’s GPS-like monitor suctioned to your windshield, (a) you will have to live with two wires running down alongside your radio and climate control console at all times. There’s no way to really secure them or tuck them away. These wires actually have to run between the two front seats towards the back, under the weather mats in the back seat and along the baby’s car-seat base all the way up to the headrest where the camera is (read:  this is NOT a wireless device!).  If you have a middle passenger, s/he will surely get tangled up in wires; (b) we feared that having the monitor continuously mounted to the windshield would be a target for break-ins/theft (which is common in most cities, big or small), so we decided it was best to tuck away the monitor each time we parked the car.

Picture quality: day time. Again, comparing this to my $10 mirror, I’m disappointed because you actually see more of what’s surrounding your baby than your actual baby. With the Yada Tiny Traveler car monitor, you can’t tell if your baby’s eyes are open or closed. I definitely have better visibility with my ordinary mirror since my baby’s face is at least 25 times bigger in the mirror compared to the monitor.  The camera even picks up what’s happening outside your vehicle, such as approaching traffic and lights – this is very distracting. And even though the lens picks up such a wide angle, I cannot see my other child sitting in the back seat (even if this argument is technically irrelevant for my family because the older one is forward-facing). So if you have twins or triplets in the back all facing the same direction, I’m not convinced that this monitor would focus on more than one face.  I can, however, see the back of my own head and almost everything happening in the front seat including out the windshield! After testing a second unit (just to be sure all of my issues with the product weren’t a fluke), it’s still my instinct to check my rearview mirror to see the reflection of the baby only to realize that I have to squint at the image on the monitor instead.  The only time it’s actually safe to look at the baby when using the Yada monitor is (a) if you’re the passenger or (b) if you’re at a red light.

Picture quality: nighttime. The Yada does live up to its claim to provide night vision, but I feel like my baby belongs in an episode of Ghost Hunters. Creepy. The only way to know if baby’s sleeping is due to lack of body movements.  It’s impossible to make out clearly whether the baby’s eyes are open or closed because the picture is simply too small.

Let’s imagine for the moment that the Yada Tiny Traveler was, say, half price (retail price is $169.99). Would it get a better rating? Honestly, my answer is still “no.”  An improved rating would mean there’s a zoom function so it’s predominately focused on just the baby’s face and body, and that it’s wireless. (In fact, sometimes I wonder if the kids in the back could get the wires loose and it might be a safety issue.)