I’m a big fan of all-inclusive resorts. Always have been, always will be. And Club Med is the original. Having only been to one other Club Med resort before being invited to experience Club Med Sandpiper Bay, I wasn’t certain it could live up to my fond memories and high expectations.

Here’s what I want to leave you with by the time this Club Med Sandpiper Bay review is done: come to Sandpiper in Florida for the food and sports.

Whenever anyone asks me which all-inclusive resort I recommend for the best food, I always say Club Med Punta Cana. After the dozens of resorts we’ve been to over the years, it still stands as my top pick. There are others that may come close, but for a foodie delight, it beats them all. Club Med Sandpiper Bay’s food offering is simply a smaller version; so the food is consistently excellent for every meal — there’s just not quite as much choice as there is at the Punta Cana property.

But if you’re a Club Med regular, fear not: they have the white chocolate bread! For the uninitiated, this is a Club Med staple around the world and it’s just soooo YUM. Other must-tries include the chocolate-banana-filled croissant (as well as the plain croissants, actually), and the freshly made crepes — just ask for a drizzle of dark chocolate sauce and then make your way over to the station with the blueberries and pureed raspberries for a wonderful topping. Friday night is seafood night, so if you like shrimp, crab, mussels, lobster bisque and scallops — this is your night. 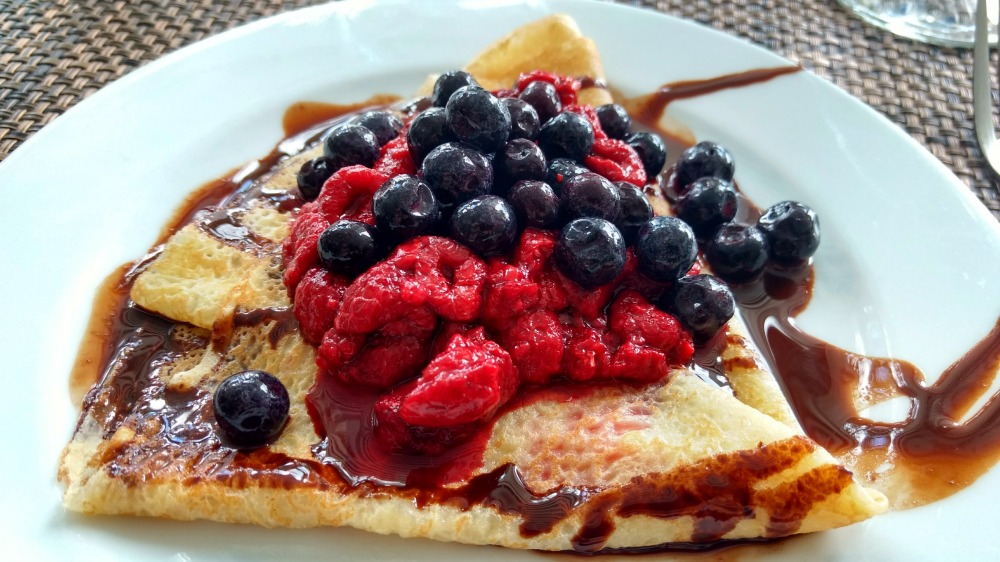 And that’s just the buffet. Club Med Sandpiper Bay does also offer an à la carte-style restaurant onsite. I had the seared salmon and it was marvelous. Cooked exactly the way this gal likes it — moist. (I know some of you hate that word. Sorry. But that’s the best description. And it’s the way fish should taste.) I had the rib eye here for dinner one night, and it too was prepared to perfection. 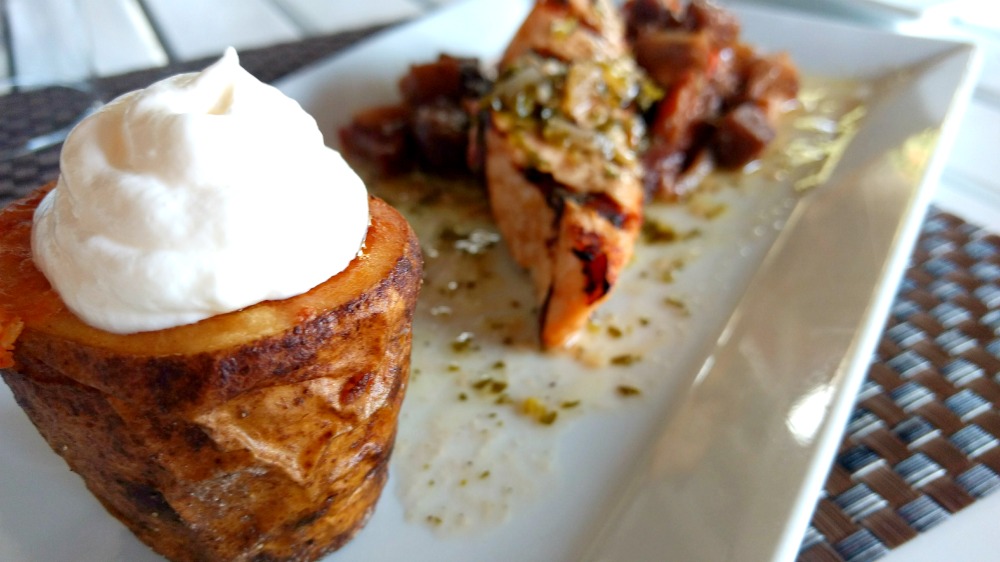 Now for the sports. Holy moly, are there sports! Although all Club Med resorts are known for their wide range of activities, Sandpiper Bay differs slightly in that it specializes in three distinct academies: golf, beach volleyball and tennis. And not just for guests, either. There’s also a school onsite for full-time sports prodigies who actually live and learn onsite. There’s the No. 1 youth tennis player from Japan, for example, who’s a Club Med Sandpiper Bay boarding student; he’ll do a few hours of school each day and then dedicate the remainder of his day to tennis training and conditioning. These kids go on to full-ride scholarships at Ivy League schools and many on to professional sports.

But let’s get back to everyday guests like you and me. If you’re someone who loves or wants to learn to love golf, tennis or beach volleyball, this is the place.

I’ll be honest: I had little desire to play any of these. They’re just not in my skill wheelhouse and not something I thought I’d find very fun. I’m much more a watersports kind of gal. However, always one to dive in and try anything, I agreed to tennis and beach volleyball lessons.

When the beach volleyball coaches asked what my skill level was, all I could conjure was “Um, about grade 4?” Because that’s probably the last time I touched a volleyball. But lo and behold, in less than two hours I learned how to create a “table” with my arms and move my body to get under the ball and consistently get that ball over the net. I was shocked. Before this experience, I would have NEVER joined a beach volleyball game. Ever. Now I wouldn’t hesitate. 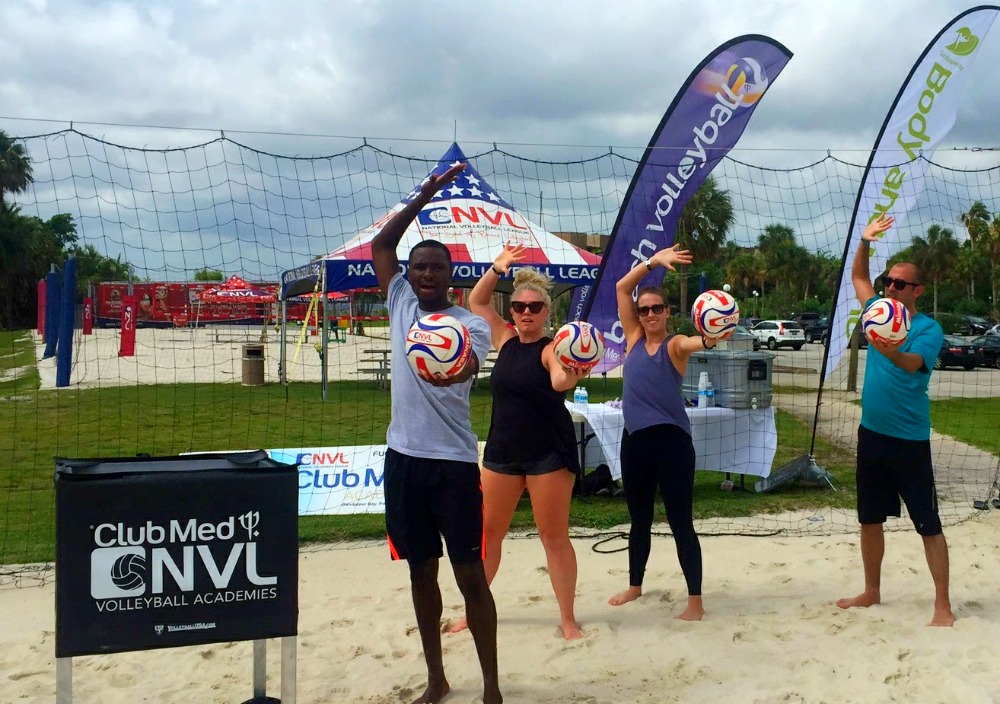 Same went for tennis. Because the way Club Med breaks down a sport into bite-sized pieces is exactly what I needed. They build on skills one at a time and then start to put it all together. And before you know it, you’re 40-LOVE or diving into the sand for a volleyball.

Flyboard. Is. So. Cool. I’ve been wanting to try Flyboarding since I first learned about it in Aruba nearly four years ago. You’re strapped into modified kiteboarding boots (which are sort of like an open-toe snowboard boot) that are attached to a small platform. Then that is attached to a huge hose connected to a Jet Ski, which is what gives the platform its power to shoot up into the air. Once you know how to get your body from a Superman position in the water to an upright position, that is. It’s not cheap ($100 for about 20-30 minutes) and one helluva learning curve, but so worth the cost and effort:

One of the things my family loved most about Club Med Punta Cana was the trapeze, and they have one at Sandpiper Bay as well. Yeah — an actual flying trapeze! And anyone over the age of about three or four can try it. No joke — inside of 15 minutes, you’ll be hanging upside down by your legs on the trapeze bar and doing a back flip onto the net. It’s soooooooo much fun.

If your days aren’t eaten up by any of the sports or activities I’ve already mentioned, there are also fitness classes and yoga, stand-up paddleboarding, sailing and more. I didn’t even come close to making my way through everything in four days.

The grounds are beautiful. It felt much more Caribbean than Floridian to me. I loved just wandering through the palm trees and lush gardens. 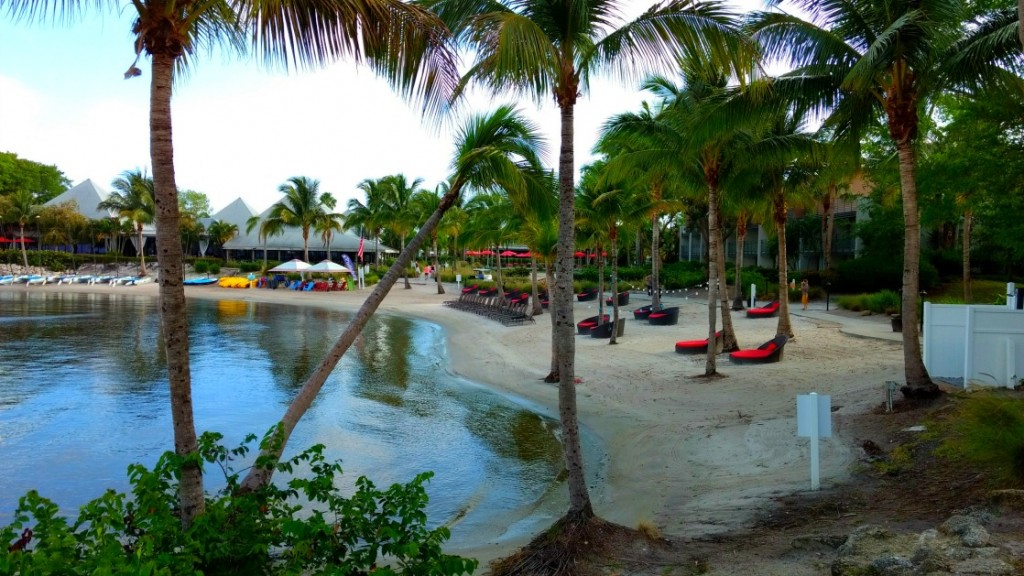 Not to be missed is the L’Occitane Spa. I had a glorious facial that started with a foot bath and ended with me fast asleep at the hands of my aesthetician. But perhaps one of the nicest features of the spa isn’t inside the spa at all, but outside in a tropical paradise where you wait for your service and retreat to afterwards. 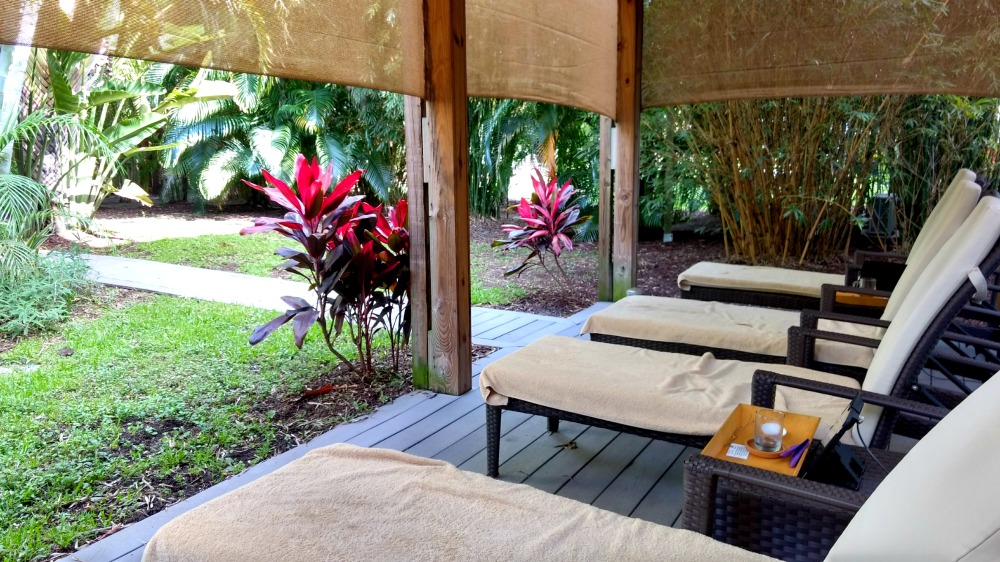 If you’ll be staying at Club Med Sandpiper Bay during a Saturday night, pack an all-white outfit for the weekly White Party. Seriously, everyone does it. And the night culminates in a full-on dance party that’s open to everyone, including kids, where you can join in on or watch the Club Med “crazy signs” dances, and dance the night away with a live DJ. It’s a blast.

If you can make it to one of the circus shows at night,You and your kids will recognize many of the staff (called G.O.s) who participate in some pretty outstanding acrobatics.

The pools at Club Med Sandpiper Bay are exactly what the doctor ordered after a “hard” day of sports and eating. If you’re on an adults-only trip or your kids are occupied at the kids’ club, be sure to head over to the Calm Pool (a.k.a. Zen Pool), which also has a hot tub that looks out onto the St. Lucie River. It’s beautiful at sunset and exactly the right temperature. 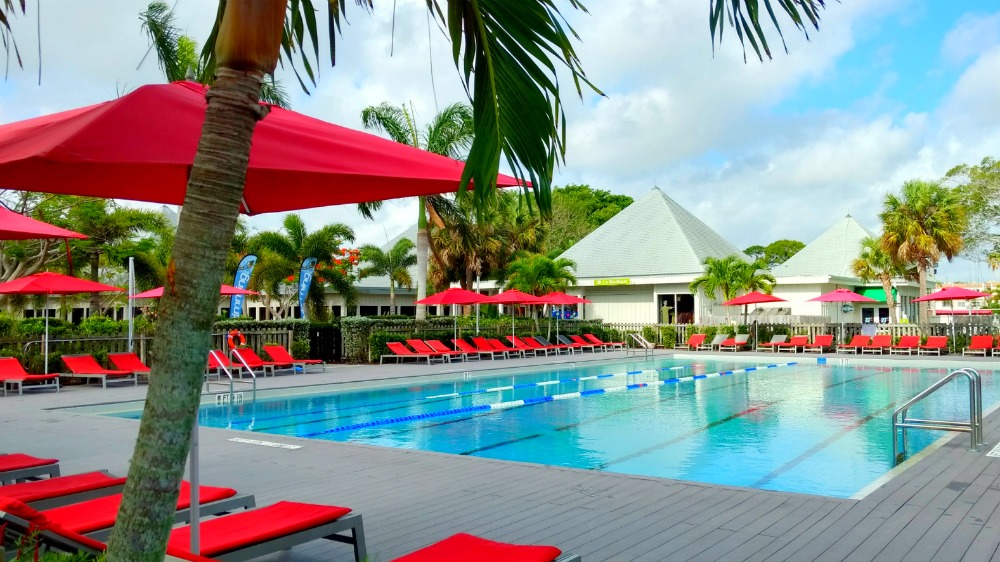 One word of warning about the huge Muskoka chair on the property. You will want a photo on this thing, because not only is it perfectly branded for all your Facebooking needs, but it’s pretty unique because it’s made (at least in part) out of skis! Just don’t try to hop up as you would getting out on the side of a pool, say. The ski tips will get your thighs good. I have a killer bruise to prove it! Instead, crawl in through the opening on the side under the arm rest. 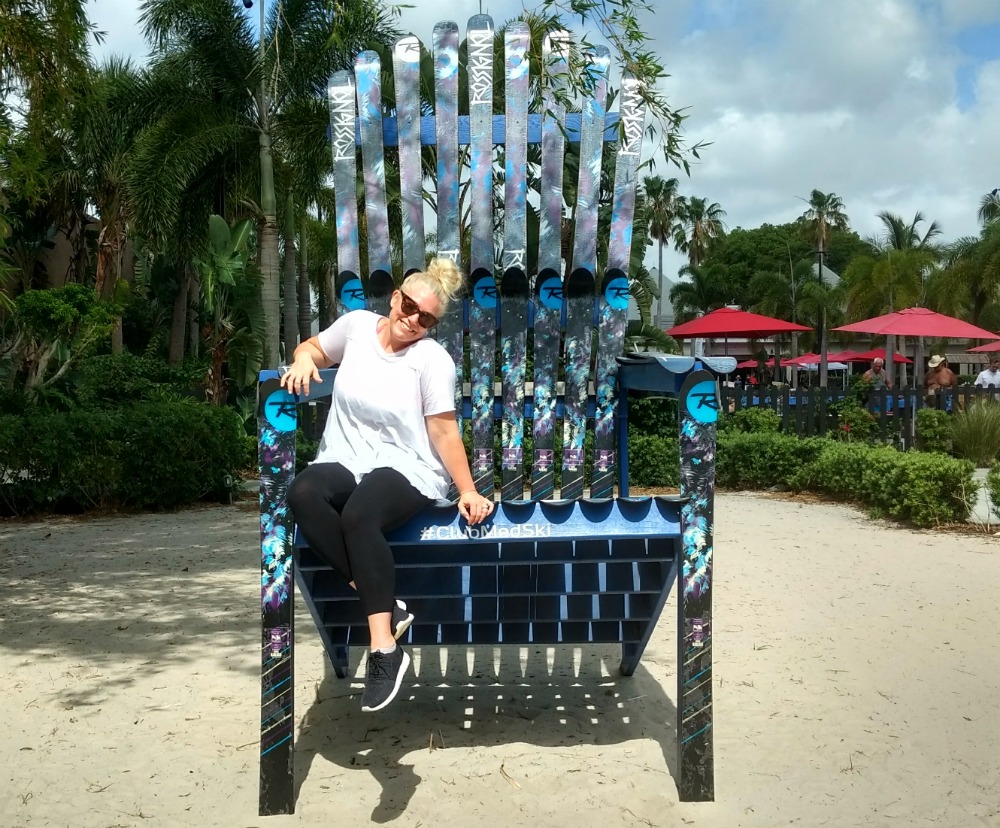 The family rooms at Club Med Sandpiper Bay are ideal for families who are coming to Club Med to spend their days out and about around the resort. My room is exactly what I’d have chosen had my whole family been with me, because it had a separate bedroom with two twin beds for the kids. And their own washroom. Down the hall, the main bedroom featured a king-sized bed, chaise lounge, TV and a balcony. The living space is pretty huge, offering plenty of room to lay out clothes or give the kids some space to muck about while you’re getting ready for the day.

I’ve said it before and I’ll say it again: you don’t go to Club Med for lavish accommodations. That’s just not what it’s about. If you’re staying in your room beyond sleeping and showering, you’re doing Club Med wrong. So if you go expecting your room to be the lap of luxury, akin to something out of a Four Seasons or another five-star hotel, you’re bound to walk in and take pause. The rooms are incredibly clean. Housekeeping is flawless (including evening turn-down service). The beds and pillows are very comfortable. But based on the two Club Med properties I’ve visited to date, they’re what I’d consider pretty average four-star rooms.

It took me a while to figure out how to get the main shower, and not just the hand-held, to spout water. I had to grab a towel to protect my ever-so-delicate hand and pull a long (what I originally thought was decorative) lever pretty hard to get it to work. But it did, and the water was hot and plentiful.

Club Med Sandpiper Bay is not an oceanfront resort. It sits on the St. Lucie River and overlooks a lovely bay. There’s not a lot of swimming in the bay — it’s primarily for the copious watersports that are offered here. So if you think you can’t manage a holiday without some serious ocean time, this may not be the resort for you. Check out nearly all of Club Med’s tropical resorts for beachy goodness. 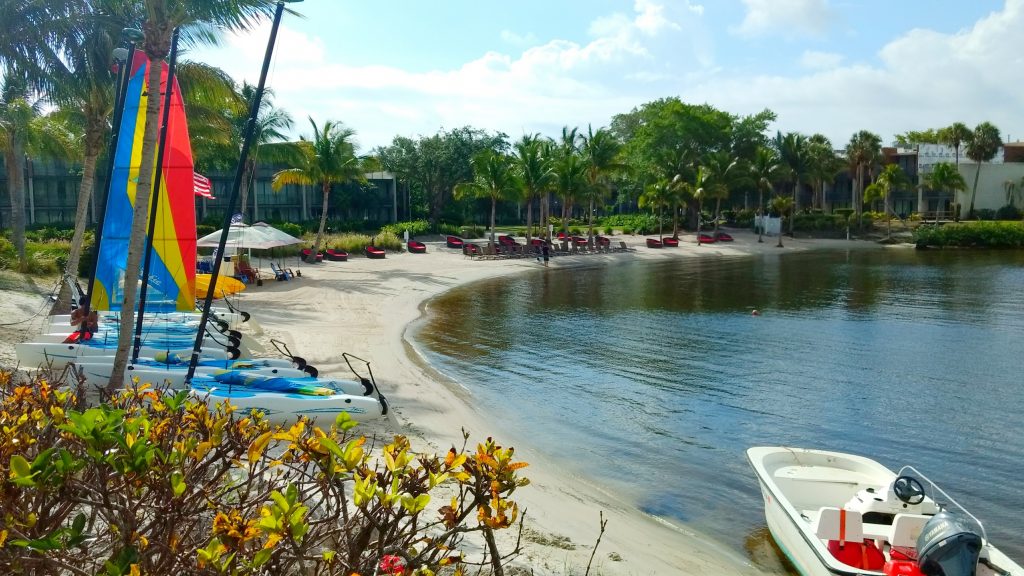 This Club Med Sandpiper Bay review will help you decide if it’s the right holiday for your family.

While this may not be a deterrent for some, I need to note that it takes about two hours to get to the resort if you fly into Orlando, Fort Lauderdale or Miami. It’s a nice enough drive, but I prefer to be closer to the airport so you can just unwind already. An alternative is to fly into the airport in West Palm Beach, which is only an hour away; though this might be a good option for those in major U.S. cities, I checked routes from both Toronto and Montreal and there are no direct flights, so it wouldn’t likely save you much time in the end.

My Club Med Sandpiper Bay review bottom line? It is so much more than sports and food. Club Med has that je ne sais quoi. A vibe, an essence. Something special that’s hard to put down on paper and needs to be experienced first-hand. I’m excited to explore more of them, but so far it’s 2/2 on the awesome front.

« Glama Gals for no reason!
What is Orangetheory Fitness? »