It seems that no one has birthday parties at home anymore. Clearly, this has its benefits: no cake ground into your carpet; guests can’t arrive early or leave late; and the kids easily burn off all the sugar they’ve inhaled throughout the afternoon.

But it has its downsides, too.

En route to a party for one of The K Man’s best friends last month, we were excited. He asked, the whole drive there, “Do you think it’s a real castle, Mommy?” It wasn’t, of course, but the right staff could have made the Enchanted Castle pretty enchanting. After all, this is a cute four year old’s birthday we’re talking about – not a bunch of ill-behaved preteens who are slightly too old for this kind of party. 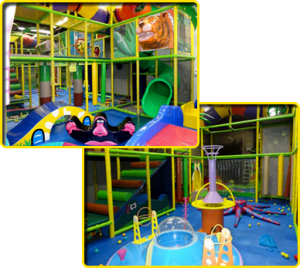 It started off well enough – we arrived and a staff member politely took our gift from us so we could remove our shoes and get into our socks (this is a good place to note that you MUST bring socks with you to these indoor playgrounds; shoes and bare feet are no-nos). We went off for a quick pee – “But I don’t haaaaave to” – in a small but clean washroom.

Then we walked into a three-story padded room. Primary colours galore! The first floor featured a small play area with a tiny trampoline for the really little ones, like Miss Q. Air-powered ball explosions made up the rest of the space – you stuff these soft balls into air tunnels and they shoot up high before cascading down upon the children…PING! PING! PING! We had a great time just throwing balls at each other.

Up a few obstacle-riddled ramps, older toddlers and big kids can make their way up to a second floor that sports four air-powered cannons that shoot out these same balls. Seriously awesome. A slide wide enough for a two-parent-and-kid sandwich takes you back down to the first floor; this is probably the fastest slide I’ve ever been on. The K Man and I rode air at the bottom for a good three feet before bouncing onto the mats. Major fun points. Just beware that younger children will need help; we had a 2.5 year old go down herself and she ended up with a hairline fracture when she landed on her thumb.

The third floor is a series of tunnels and nooks that lead across mesh-enclosed ramps to a twisty slide. The K Man flat-out refused to go down this slide. I thought it looked like a blast.

I found the party timing, dictated by Enchanted Castle staff, bizarre. Our party was scheduled from 2 to 4:30 p.m. We played until 3 p.m. and were beckoned to eat. This is snack time – not dinnertime – at our house. My kid barely touched his food and I had merely a few crackers and hummus. This also meant we had to figure out dinner when we got home at 5 p.m.

While we’re talking food… It’s great to have a separate eating area, so the kids aren’t too distracted to eat. And while the Enchanted Castle’s stuff-your-face zone was big enough for the 20 kids plus parents who were at this party, it’s poorly laid out. The amount of space from one long side of benches to the wall behind it is perhaps eight inches. This makes walking behind people to find a place to sit an exercise in making yourself uber-skinny. I am not skinny.

The end-of-play warning system stinks. Lights COMPLETELY off, then flicked on and off in quick succession three or four times. Thankfully, I was on the first floor and within arm’s length of both kids when this happened the first time. It scared the bejeezus out of me. Remember, there could be a two or three year old careening down an enclosed slide when the lights go off without warning. There’s got to be some kind of fire code infraction here.

I’ve saved the worst for last. One of the staff members – she seemed to be the one in charge of the operation that day – was beyond annoying. You know when someone hovers over you while you’re eating? She didn’t stop there. She asked – Every. Three. Minutes – “Are you done now? Can I take your plate?” Let me tell you how slowly I ate those crackers.

My son asked if he could go get a cupcake, and I said he could go and get it and bring it to the table but had to wait for all of the other children to get theirs before digging in. The next thing I know, he’s running in my direction in tears, pointing at this staff member, telling me she said he couldn’t have one. Now, I understand that sometimes the structure of the party place means that things have to happen in a certain order to prevent sheer chaos, but it’s all in the delivery.

We were allowed to resume play following the meal, and when one little girl tried to go back into the enchanted part of this castle, The Gate Keeper condescendingly asked in a volume that was obviously intended for the girl’s parents: “Are you sure you’re ready to go and play?” Honestly, the kid had a dab of icing on her lip.

Finally, when we were being shuffled out the door, I called for The K Man to come and grab a loot bag from the host. He had his Crocs on and had to come about three feet past a marked line on a tile floor to get his loot. This same staffer starts shouting at him: “You can’t go in there with shoes on!”

“Relax? We have a RULE,” she said sternly, pointing to the line marked in masking tape. It was a beautiful day – not a drop of rain or a hint of mud. Pretty sure your three feet of tile is going to survive long enough for my child to accept a loot bag.

It’s too bad, because the space is super-fun. But she was a fun-sucker. Head to Rainbow World in Pickering instead if you’re looking for a comparable space in Durham Region with much nicer staff.

Without evil staff member: 3.5/5 (I’d give higher marks if the play-eat-play timing was changed to play-play-eat)