Like many other new parents, I bought a playard (a.k.a. pack ‘n play, playpen) before my first child was born. And, boy, was it fancy. It had a detachable changing station and a bassinet that fit into one corner – suspended.

What I hadn’t considered, however, was that The K Man would grow well beyond the 100th percentile in his first year. (Honestly, I thought I had Paul Bunyan Jr. on my hands, but he’s plateaued quite nicely, thank you.)

The bassinet turned out to be useless to us, both because he outgrew it in three weeks and was partial to sleeping on a warm, human body. The changing table came in handy on the main floor, but was a tight squeeze after a couple of months. And, by month nine, the confines of this pack ‘n play were just too tight for our little man who covers more real estate in one hour of sleep than you could imagine.

But when we were invited to a cottage weekend when The K Man was two, and not yet sleeping in a proper bed, I took to the internet to find a solution. I happened upon the Joovy Room2 (where is the superscript function on WordPress when you need it?!), and after seeing it in person, I was sold. I bought it in red.

I was reminded how much I appreciate this essential piece of baby gear when we visited Great Wolf Lodge earlier this week. Miss Q is nearly 21 months old – and a big baby to boot – and has no problem spreading out while she sleeps, rolling about in this pack ‘n play.

This puppy – when unfolded and in its full pack ‘n play glory – is a very generous 10 square feet. It’s an enormous amount of space. I don’t know a thing about raising twins, but my guess is that you could easily fit twin babies in here comfortably for the first year at least. Or one gigantic baby like the ones I seem to birth. In fact, the Joovy Room2 is so spacious that Miss Q didn’t even mind being popped in there to play when she was newly mobile and I needed time to cook a meal.

Considering its size, it folds into a very compact package – the same as a standard-sized playard – and comes in it’s own zippered carry 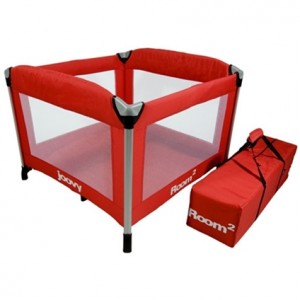 case. It fits just fine in the back of our CUV.

It’s got two lockable wheels on one side, which make wheeling it around a breeze if you need to once it’s set up.

This is one sturdy piece of gear. We’ve used our Joovy Room2 many times over the past two-and-a-half years and it looks and operates like new. No pulls, rips – nothing. The colour is still as vibrant as the day we bought it. Very high quality.

It comes with its own (thick and cozy – but not organic) fitted sheet, which is a good thing since I’m not sure you’d find something else that works for a square-shaped mattress pad that’s five feet by five feet.

It’s obviously comfortable enough; both of my kids have slept for hours and hours in it.

There are no bells and whistles here, so if you’re looking for a change pad combo, this isn’t the playard for you. But think practically into the long future you could have with a portable bed and the change pad becomes much less important.

Big B totally hated setting up the Joovy Room2 for about the first year. Make that two. There’s a certain science to hoisting any pack ‘n play, as countless tenured parents will tell you. You have to follow the steps exactly as described in the often poorly written instruction manuals. Though having set this one up myself a few times, I’ll admit that the actual frame is quite straightforward, but it’s the damn mattress pad that caused sweat and swear words to escape from every pore of Big B’s body. There are all these Velcro straps that have to be woven through the fitted sheet in just the right way so that it lays flat in the playard. Big B’s advice? Take your time, take a deep breath and tell the Joovy Room2 in no uncertain terms that it won’t get the better of you this time.

If you’re not going to use this for a few years, the price tag of $150 to $200 might give you sticker shock. After all, the full systems with bassinets and change pads that change your baby’s bottom for you and mobiles and other jazzy things cost about the same. But I believe their shelf life is limited by their interiors. There is simply no other pack ‘n play on the market that compares in size to the Joovy Room2 of which I’m aware.