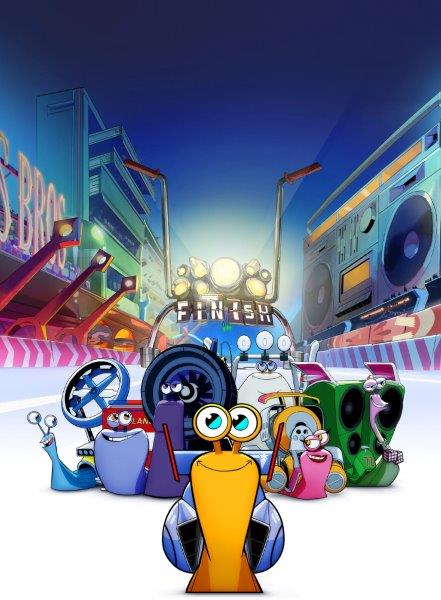 What it’s about: Making its global television debut on Christmas Eve (December 24) at 12:01 a.m. Pacific Time, Turbo FAST is a spinoff of the super-fun movie by almost the same name: Turbo. Still featuring all of your kid’s favourite garden-dwelling characters — Turbo, Whiplash, Burn, Smoove Move, White Shadow (“Whiiiite Shadohhhhh…”), Skidmark and Chet — Turbo FAST picks up where the movie left off, with a new home for all the snails and slugs in the land. A killer racetrack, and all of the antics that go along with a bunch of snails racing Indy 500-style, take centre stage. Fans of the movie will be glad to hear that comedian Ken Jeong (also of The Hangover) reprises his role as the manicurist-turned-home-shopping-icon Kim Ly.

What The K Man said (after watching the first two episodes in the new series): “I really, really love this show, Mommy. I think kids will really like it, and they’ll probably want to run Turbo FAST. I’m really excited that it’s a TV show now and not just a movie. I can watch it with my friends who don’t even have the movie. The best part was when Turbo tied up the Gecko with his Turbo Tape Speed.”

The verdict? It’s a big winner. Now’s the time to get Netflix if you don’t have it already.