I’ve kissed enough boo-boos to know that even one of Mommy’s “magic kisses” can’t make the tears stop when there’s blood involved.

Between The K Man learning to ride a bike and Miss Q learning to walk, we had our share of scrapes and cuts this summer. Some of them were really very minor, but the slightest bit of red had both of my kids crying for bandages.

I can’t say I ever though too much about the kinds of bandages I bought until I was stocking our family first-aid kit last year. I wanted some kid-friendly ones and I managed to find some with Curious George on them. They were cute, and I suspect The K Man’s first boo-boo was nearly on purpose just to try them.

There was hardly any “stick” to them, and Curious George found himself in the bin before long.

When the rep for Ouchies Adhesive Bandages asked if I wanted to review its stylish line, I jumped at the chance. I’ve reviewed so many mompreneur-created products and Ouchies are from a DADpreneur! That, and I really wanted to put the stick-factor to the test. 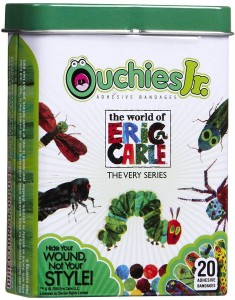 Just say “no”… to beige! You’ll hardly believe your eyes when you check out the huge selection of Ouchies available. We have the Eric Carle-themed Ouchies (my kids adore The Very Hungry Caterpillar and The Grouchy Ladybug, among his other classics) and they’re super-cute.

Ouchies are kid-sized but not pint-sized. They’re bigger than those Curious George bandages but smaller than a regular Band-Aid. They’re pretty much the perfect fit for a kid.

One-hundred per cent latex-free! So if your kid has a latex allergy, he shouldn’t have any issues with these super-stylish bandages.

Every package of Ouchies comes in a cool tin, which your child could easily reuse once your stash is gone (for, say: small crayons, a budding stamp collection, random feathers from your duvet that your kid seems to find oddly appealing).

Best of all, Ouchies stick. After using them all summer, I can tell you that they fared pretty well with two very active children. Our Ouchies bandages have even made it through the night.

Finally, while it has nothing to do with the product itself or how well it works, I do love clever writing and funny marketing. Ouchies doesn’t disappoint with its “People Against Boring Bandages” movement. You can even join P.A.B.B.

Each packages of Ouchies – at least the Eric Carle ones – come with a few different characters/patterns in one tin. If my kid is wailing 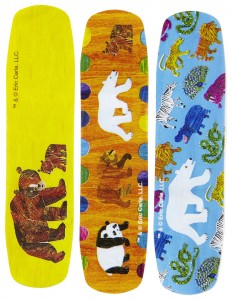 like a banshee for a damn caterpillar bandage, I don’t want to open a firefly. Yet, because the bandages are all packaged in the same white paper, it’s impossible to know what you’re gonna get. It would be amazing to know which ones are which without having to peel back the packaging.

Yes, they stick, but if you’re looking for the same level of stay-on-your-kid-for-a-week adhesion that you get with a good-quality bandage of the beige variety, it’s not happening. You can expect a full day for sure with even some promise of overnight success and into day No. 2. But if you think you’re going to be ripping Ouchies from your babe’s tender skin with a “1-2-3-pull!” approach after several days, this is not your bandage. (But is that really a bad thing? I hated having Band-Aids ripped off as a kid!)

Cool doesn’t come cheap. At somewhere between $5 and $7 per tin, depending where you buy them in Canada, Ouchies work out to about 25 to 35 cents per bandage. Ouch.

So…where can I buy it?