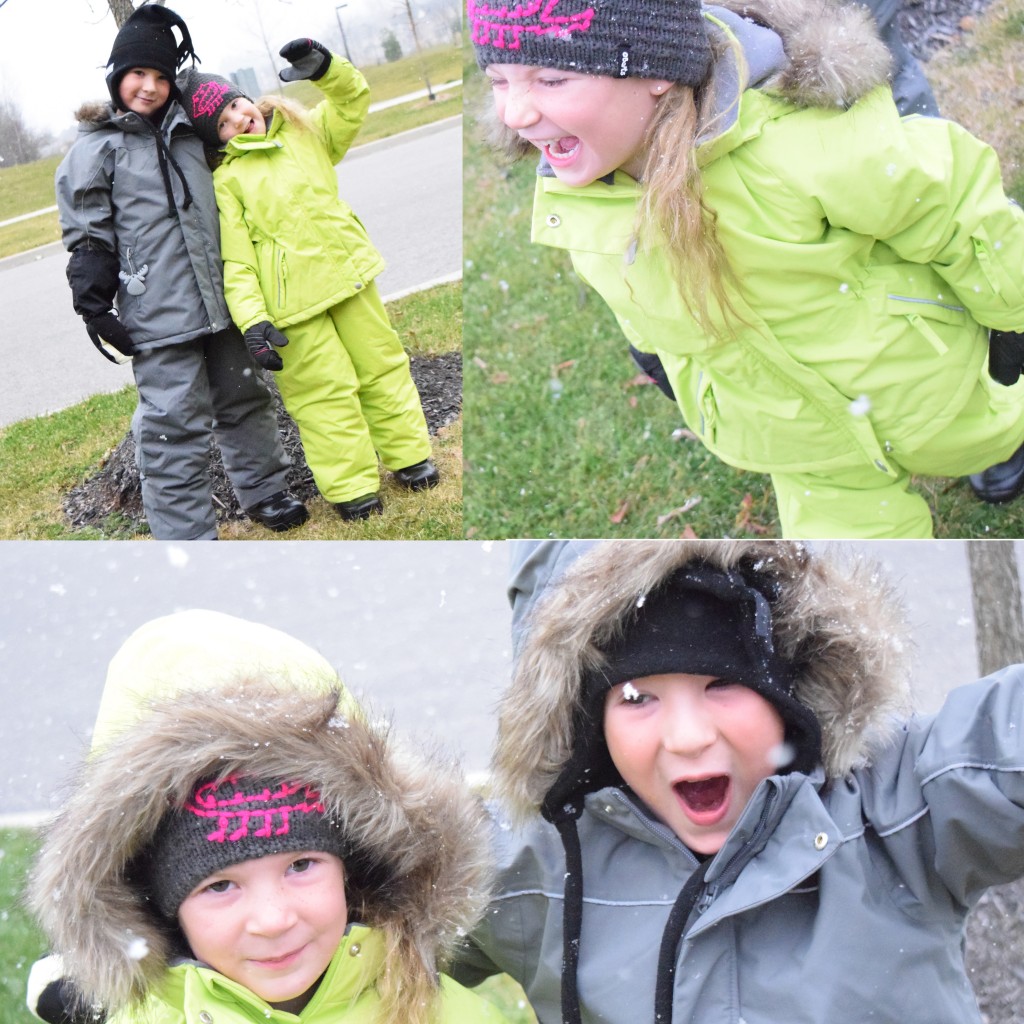 When I posted a feature on Wheat Canada’s outerwear last winter, my kids had only spent a few weeks in their snowsuits. Truth be told, I normally like to test things for at least four to six weeks (and often much longer) before writing about them to put them in as many real situations as we’d normally face.

They were each washed at least six or eight times, and they should have required knee patches halfway through the season the way my kids played in them. But barring one missing “pull tab” on The K Man’s ski jacket, those snowsuits held up so well that they could easily be used again this year — if they fit my kids, that is. Alas, they grew like the proverbial weeds as children are wont to do and while they can still get into last year’s suits, they just fit. As in, 12 minutes from now, they probably won’t.

So up a size we went (Miss Q into a size 6 and The K Man into a size 10). I kept K in the same style and colour — why fix what ain’t broke and all that — and opted for a two-piece for Q this time around. She’s mastered zippers this year, and it’s nice to have the option to wear just the jacket if need be. However, for a kid who went to school at age three that one-piece option we had was a life-saver and probably saved the teacher’s sanity, too.

And just like every winter for the past three years, my kids are both going to brave the Great White North and all her snow and frigid temps wearing STONZ Winter Bootz — one of the very small handful of products that have earned a coveted 5/5 rating on this here website. They’re warmer, dryer and weigh far less than any other kids’ boots on the market that we’ve tried (which include Kamik, Sorel, BOGS, UGG and others).

That last part — their weight — is especially important for little legs, which tire easily; STONZ Bootz weigh a fraction of any other waterproof winter boot. They’re easily on par with UGG, and we all know how well UGGs hold up under wet snow! (As the proud and satisfied owner of four pairs of UGGs, I speak from years of experience; I’ve learned to throw on a pair of Sorels when I’m building snowmen or making snow-angels.)

Even on the coldest days of winter last year (and we had some pretty cold ones), we were able to spend lots of time playing outdoors thanks to the butt-kicking dream-team duo of Wheat Canada and STONZ. The Bootz can handle up to minus-50; the Mittz are incredible and come right up over your kids’ sleeves and have two elastic pullies to keep cold, wind and wet out; and the snowsuits, while they don’t note a “chill rating,” were comfortable on days last year reaching deep into the minus-20s. I suspect they could even perform well in a Manitoba winter where the kids aren’t even allowed to stay in for recess unless it’s like minus-35!

All this to say that if you aren’t yet organized for winter, now’s the time. It’s coming. And you don’t want to see “SOLD OUT” icons on the gear you want the most. I truly wouldn’t steer you wrong — Wheat and STONZ have got your kid covered as the cold rolls in. So get shopping.

A contest, you say?

Here’s your opportunity to win one Kick Winter’s Butt outfit for your child. Thanks to Wheat Canada and STONZ, we’re giving away one killer winter prize pack valued at up to $340, which contains:

To win, you must complete all of the following:

The fine print: the contest is open to Canadians, excluding Quebec, and will run from Nov. 22, 2015, through Dec. 6, 2015, at midnight EST. Prize has no cash value and winner understands that MommyGearest et al cannot be held legally responsible for prize fulfilment or issues arising from the prize. The winner will be chosen from all eligible entries using random.org, will be notified via Instagram tag and will have 48 hours to claim his or her prize before a new winner will be randomly selected. GOOD LUCK!