During a recent play-date, my friend admitted to giving her 12-month-old son two per cent cow’s milk. Perhaps there was the look of horror on my face that followed. I was nearly certain that babies under the age of two need the higher fat content found in homogenized milk for proper brain development, but this conversation cast a shadow of doubt. I feigned confidence, strongly suggested she buy some whole milk for her little guy, and secretly enlisted Google‘s help to affirm my case as soon as they left.

After all, the higher the fat content in milk, the higher the price. So, if the “rules” had changed between having both of my kids, I was open to saving some money on our weekly milk run.

The evidence still points to whole milk as the best cow’s milk choice for babies aged 12 to 24 months. Note that I write “cow’s milk” – because you could surely still be successfully breastfeeding during this time and not need to purchase any milk at all. However, if you’re like me and work throughout the week and can’t be within a boob’s length of your kidlet at all times, you’re gonna need some other kind of milk. The three-and-a-half per cent variety (or more, depending on the brand) offers a better mix of calcium, carbohydrates, protein and vitamins for those rapidly growing noggins.

We introduced organic homogenized milk to both kids at around the year mark – both took to it without any taste or digestion issues. But I’m a sucker for new products, so when I heard about Baboo by Natrel, I hopped over to its Facebook page to check it out. And aside from some great info, there was a coupon for a free one-litre Tetra Pak of the stuff. The only thing I like more than new products? Free products. 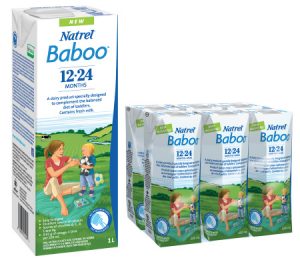 I confess: when I first heard that Baboo was geared toward 12 to 24 month olds, I expected it to be a carbon copy of formulas aimed at toddlers. They’re junk, laden with sugar (often the second ingredient) and I don’t even know who buys it. Actually, I take that back – caregivers who don’t know how or take the time to read ingredient lists and nutrition labels…that’s who.

Yet, I was pleasantly surprised to discover that Baboo only has seven ingredients, all of which I can pronounce. And I could barely believe my eyes when I saw that the sugar content (11 grams per cup) was actually lower than whole milk, which packs an extra two grams for the same serving size.

Now, I’m a big proponent of first tasting anything I’m going to give my kids if it’s something new. I wanted more than just a sip, but at four per cent fat, I stopped there. It was delicious. Like drinking a creamer at a diner kind of delicious. Without hesitation, I poured a cold, tall sippy of it for Miss Q; down it went.

I love that Baboo comes in two Tetra Pak sizes – a one litre and a six-pack of eight-ouncers, juice box-style with straws. This makes Baboo ultra-portable because you don’t need to refrigerate it until opened. So if you’re going camping, on a day trip to the zoo or an amusement park, cross-border shopping or just to the neighbourhood park for a picnic, I can see its convenience.

We are organic milk drinkers in this house, and Baboo is not organic. Maybe that’s phase two for Natrel? I mean, the company sells organic milk so it’s really just a matter of finding organic versions of the non-milk ingredients. (Right?)

Of course, an organic option will naturally mean a higher price and I already feel like Baboo is priced right at my ceiling. The one-litre Pak is about $3. We pay $9 for three one-litre bags of milk (from President’s Choice or Organic Meadow), so it’s the same price. That said, it is a transitional milk and there was an organic alternative, I’d consider a slight premium knowing it would only be for a year.

While we’re on the subject of price, I have to address the price difference between the one-litre and the six pack. The latter is $6! So, let’s do the math: if one litre contains four 8-ounce servings for $3, and the six pack contains six 8-ounce packs for $6, then you’re getting two 8-ounce servings less by purchasing the six pack than if you bought two one-litre Baboo Tetra Paks. (Still with me?) At that price, I’ll only buy six packs for long day trips or weekenders.

This product is still pretty new, so maybe that’s why its availability isn’t great – not to mention puzzling. You can buy Baboo at FreshCo, Wal-Mart and Shoppers Drug Mart. But you can’t buy it at Loblaws or Real Canadian Superstore. At $3 per litre, I’d call Baboo something of a premium product. FreshCo and Wal-Mart don’t scream premium. Besides, I shop almost exclusively at Real Canadian Superstore so it sure would be nice to get it along with the rest of my groceries.