Not a day has passed since we welcomed The K Man into the world that music hasn’t been part of our daily routine. Whether it was dancing to ABBA around our tiny living room in our first home, singing my special goodnight songs for each of my children or listening to Squishy Banana every morning while we prepare and eat breakfast, music is there.

While we don’t force ourselves to listen solely to children’s music, since we think exposing them to all kinds of music is good for the soul, we do appreciate good kids’ tunes.

The music is lovely, as you’d hope lullabies would be. But beyond soothing, the lyrics are good and the melodies are easy on the ear. These are songs you won’t mind learning and singing over and over to your babies as they grow up. At four, The K Man still loves to hear his “goodnight song” that I’ve been singing to him since birth. Any one of the songs on Carousel Dreams could become your child’s goodnight song.

Actually, after listening to it several times, I can’t even identify a favourite song because they’re all beautiful. If I had to pick, it would be between the title track, Carousel Dreams, and Starlight Lullaby.

The recordings are crisp and don’t sound like they were recorded in someone’s basement. Kudos to the producer if they were.

There are instrumental versions of each of the six songs, which is nice for those of you who are closet broadway stars like me. The songs are just as good without the lyrics and could go on your iPod’s “repeat” playlist if you have a baby who only naps with music in the background.

The vocalist has the perfect lullaby voice – soft but not too breathy, and a vibrato that isn’t overkill. And, because I’m a closet broadway star, I appreciate a good vocal.

At just $9.99 for the MP3 version of the CD, the price point is easy to take. And if you only want the songs with lyrics, you can buy them individually for 99 cents.

There are only six songs with lyrics; while I appreciate the instrumental versions, I would 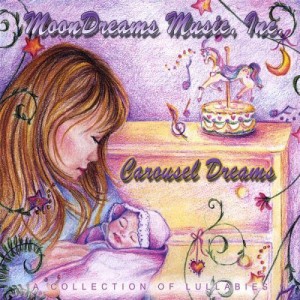 much rather have more original songs.

The artwork and fonts used on the CD jacket are a bit school project-ish. Despite being a marketer, I am a sucker for good marketing. Strong visuals and a clean aesthetic always draw me in. What’s inside may ultimately disappoint, but – unfortunately – I often judge a book by its cover. I would never pick this CD up on a store shelf. And that would be such a shame because what’s on the CD is so, so much better than its jacket would suggest. In fact, just order the MP3s so you don’t have to look at the cover.