I’m a duvet kind of girl. My parents gave me my first duvet when I was in university, and I’ve never looked back. I love their versatility, since many duvet weights are multi-season, and I love that lofty look they give your bed nestled into the right duvet cover.

When I moved to Europe in the late-’90s, I was surprised that duvets are simply thrown onto beds, atop fitted bed sheets. They don’t use flat sheets, so there’s nothing between you and your cozy duvet.

I’ve always owned Canadian-made goose-down duvets and until only a few years ago, I didn’t really know anything else existed, other than those horrible polyester-filled comforters that normally come in a matchy-matchy set with a pouffy bed skirt and pillow shams sporting a terrible design. Aside from polyester being one of the worst environmental offenders, I’m more offended by terrible design.

But other duvet options do exist, of course. There’s silk, wool and even alpaca. If you’ve been looking at those options in the organic category, you’ve probably got some serious sticker shock. These kinds of duvets can fetch up to $700 for a double-size alone. You read that right: seven-oh-oh. Seven hundred dollars. For a DOUBLE.

Now, look. I try not to put a price on my kids’ health and I wax poetic about price-per-use, but damn. There’s not a chance in hell I’m spending anywhere near $700 on a duvet for my kid. Even if each little silkworm was nursed by unicorns and weaved magic dust into each bit of silky fluff, eliminating bed-wedding and nightmares. Even then, I’d have to think really, really hard about parting with that much money. Twice. Because I have two kids.

That’s why I did a double-take when I found Dream Designs – a Vancouver-based company that makes organic bedding. Its bamboo/rayon duvet, which comes in two weights, is a comfortable price. I’m thankful to them for sending me an all-season weight duvet to test for this series, and I’m excited to introduce you to a duvet for your child’s bed that’s both affordable and safe.

Let’s start with price. At $169.99 for a twin-sized duvet ($199.99 for a queen), Dream Designs’ bamboo/rayon all season duvet is pretty affordable. It’s a fraction of the price of any of the other organic duvet options I found in Canada. You’re looking at a daily cost of just 46 cents for the first year. Considering your child will probably have his duvet for at least 10 to 15 years, I give this bargain status. 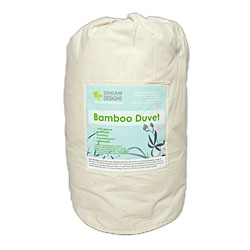 As I mentioned in my review of those buttery bamboo sheets, bamboo has many positive qualities. It’s antibacterial, breathable, temperature-regulating and odour-resistant. The most important of these for me is the ability to keep you warm when it’s cool, and keep you cool when it’s warm – and, like wool, bamboo does that. In an Ontario climate that’s as unpredictable as a toddler’s mood from one minute to the next, the last thing I want is for my kid to overheat on a night that stays atypically warm when it’s supposed to be frigid. In the name of research, I personally used Dream Designs’ bamboo/rayon duvet for two weeks before handing it over to The K Man. I like it better than my down duvet. I never once had the urge to whip it off because it was making me feel prematurely menopausal. I’ll provide an update once we’re in to our much colder winter weather.

The Dream Designs bamboo/rayon duvet is biodegradable. Once you’re done with it (after the many years of use your child will get out of it), if it ends up in a landfill, it’s at least – one day – going to be all ashes to ashes-like.

If you’re wondering why I didn’t provide the price of a double-sized duvet, it’s because it doesn’t exist. Strangely, there’s a crib-sized duvet – which I must plead with you, do not put a duvet in your baby’s crib; it poses very real risks – and then twin, queen and king sizes. But no double. With the number of convertible cribs on the market today, which all turn into double beds, Dream Designs really needs to introduce a double size. I will say, however, that I requested a queen size and planned to stuff it like a sausage into a double-sized duvet cover, but it fits well – with much less stuffing than I expected.

It’s kinda heavy. Dense. There’s no light, airy feeling like you get with down. Yanking it up over my bare shoulders was a bit laborious, so it definitely would be for a kid, too. I must add here, however, that The K Man has never seemed to have an issue and has certainly never complained.

It’s covered in a “natural” cotton. I don’t know what that means, exactly, but I’m sure if it was certified organic, the company would shout it to the hilltops.

The biggest bummer for me with this duvet is that it’s not machine washable. This is truly the only gaffe that has strongly impacted its overall rating. You can spot clean or dry clean only. Ack. This is not ideal if you have a small child who still wets the bed, nor is it ideal if a case of the flu rips through your house. Fortunately, we’ve managed to escape any dry cleaning bills (so far) by quickly stripping the duvet cover off of the duvet in the event of a pee or puke situation. Once we’re past the night-wetting, I’ll breathe a sigh of relief.