I’d heard of video monitors when The K Man was born, but at the time, the quality was spotty and the night vision was poor. So my first monitor was a Safety 1st audio monitor. Crystal clear sound, great range, two parent units. This worked well until the day I put The K Man down for a nap, walked out, turned on the monitor and heard an unfamiliar rustling in his room.

I walked back in and my nine-month-old was standing in his crib – for the first time.

I smiled – it was a milestone after all – and laid my beautiful boy back down. I walked out, expecting him to fall fast asleep with nary a word as he normally did.

I walked back in. Standing.

I laid him back down and left.

Rustling. (I think you can see where this is going.) For the next 20 minutes, I was in and out of that kid’s room dozens of times and he became so skilled at getting to his feet that I’d barely make it out the door before he was standing again. I finally put him to sleep in my arms and started leafing through my baby books for guidance.

Upon deciding that the next day I would just leave him no matter what rustling I heard, I sat by that audio monitor wondering what on earth he was doing. I’ll never know how long The K Man slept that day, but by that evening, I’d decided to buy a video monitor.

Lulled into a monitor romance by the Safety 1st brand, I bought the Safety 1st High-Def Digital Video Monitor. It’s a long and winding story spanning more than 3.5 years but I had that monitor system replaced (by both Babies ‘R Us and Safety 1st) at least 15 times. I wish I was joking. Ultimately, it was replaced with the Safety 1st Prism Video Monitor; this, too, was exchanged a grand total of three times before Safety 1st finally told me that they were no longer in the video monitoring business.

When PTPA asked if any member of its Blogaholic team would like to evaluate a video monitor from Motorola, my arm shot up so quickly I nearly dislocated my shoulder. The Motorola MBP33 Video Baby Monitor was soon a fixture in Miss Q’s bedroom.

Like most video monitors, the picture is in colour when there’s some light and black and white when the camera uses its infrared detection. It’s the black and white picture that usually suffers, but not with the Motorola MBP33. It’s ultra-clear (so the smaller screen size isn’t an issue at all). The clarity is so remarkable that even my parents, who are generally unimpressed by technology, ooohed and ahhhed collectively when they saw the image on Moto’s 2.8-inch screen. 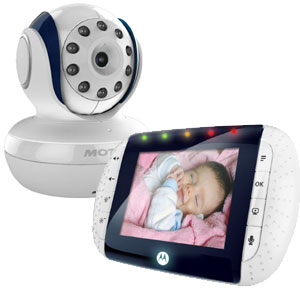 Long power cords. If you never plan to wall-mount your camera, then this doesn’t really matter – but if you want to try to get the camera so far above your baby’s crib that she’ll never be able to reach for it, poke at it or rip it off the wall, then you’re going to want some long cords.

Since I tested this with a 20 month old, I didn’t think the two-way mic option would be useful. I mean, Miss Q doesn’t need to be cajoled to sleep; she doesn’t need shushing; she very rarely wakes in the middle of the night. But I was wrong. We have used it – even just to let her know that we’re coming when she wakes up from a nap and we’re two stories down. My Dad obviously talks into it the most (he co-babysits with my Mom when I’m working) because each night as I put Miss Q to bed, she points at the camera and says “Papa…talk!”

There are lullabies – individually or played in a loop – that can be remotely activated. I have children who sleep to the sounds of ObusForme’s white noise machine, but there are many children who sleep (even if only for naps) to music. So, this could prevent the need for an additional electronic device in your baby’s room.

Very good battery life. Like, really good. Any of my previous video monitors lasted two hours – tops – before needing to be recharged. The Motorola MBP33 monitor lasts hours and hours. I would plug it in overnight and it lasted through two naps (Miss Q still took a morning and afternoon nap until she was almost 21 months old) and from bedtime (6:30 p.m.) until close to midnight. All said, that’s around eight hours. Impressive. I should note, however, that I don’t keep the video turned on the whole time…there’s no need and you suck battery life like crazy doing that.

Other than finding the on/off button (which is embedded into the top left above both the screen and indicator lights, FYI), the MBP33’s functionality and menus are intuitive. You probably won’t need to use the manual, actually.

The ability to add extra cameras is a huge bonus if you have more than one young child. You can add up to four cameras that can be viewed on a single parent unit receiver. With our other monitors, as soon as we had two kids, we added an extra camera; it’s so nice to be able to see what’s happening in both bedrooms when we’re potentially two floors away or sitting in the backyard after bedtime. Or in our neighbour’s hot tub. (Note, though, that I was not provided with an extra Motorola camera to test.)

I love the optional stand that kicks out from the back of the parent unit. Here’s a tip: it won’t double as a clip to which you can hook the monitor onto your pants. I tried. I failed.

The price is shockingly good at less than $200. To provide you with a comparison, my first video monitor was $320 and its Prism replacement retailed for $250.

Obviously, the Motorola MBP33 is PTPA-approved!

Lights. My single biggest complaint to Those Who Make Baby Products: why, oh, why do you want everything to light up like beacons in the night? I’ll let you in on a little secret, Motorola…I’ll know if the power is “on” if I can see a picture on the parent unit – you really don’t need a bright green light staring down my toddler in her otherwise (purposely) pitch-black room. If your child wouldn’t be bothered by this, then you can skip to the next paragraph now. For those of you with kids who are sensitive to any light in their rooms (like both of mine), you have a couple of options to combat this annoying light:

There’s no clock on the Motorola MBP33 Video Baby Monitor, which basically makes the “alarm” function useless unless you’re a new mama and you want to wake up every four hours for feedings

The range in the house is excellent, no dead spots. Outdoors, I can get about two suburban houses away before I get static. This is about the same as any of my other monitors, but still doesn’t come close to rivaling the AngelCare monitor my neighbours have who can get eight to 10 houses away before losing functionality. So I’d say the MBP33 is simply average on range – perhaps not a full gaffe but certainly not a brand WOW.

I wish there was a sound “block” option; this is probably the only advantage my other monitors have over the Moto monitor. The sound is always on (though, admittedly, the lowest volume setting is very quiet). For new moms who don’t want to turn the monitor off at night – even though I assure you that your hearing is extra-sensitive and you’ll hear your baby, even in your sleep – it would be nice to be able to block out background noises and the small stirring sounds that babies make and only be alerted if baby really needs you.

I’m unclear what the point of the antenna is. I’ve tried it up and down, many times, and it makes no difference in the clarity of the picture (which, at the risk of sounding repetitive, is always exceedingly clear) or in its overall range. I can’t get any farther from my house with the antenna engaged. So this is a useless piece of the parent unit as far as I can tell.

Full disclosure: The public relations firm for whom I work (that’s right; I have a day job!) represents Motorola’s mobile handsets, which are in no way affiliated with its baby monitoring division.