By now, you probably know that I love trying out and writing about makeup and skincare just as much as I do with kids’ stuff. And that’s because, at my core, I’m just a product junkie in general.

I’ve been playing with makeup for as long as I have memories. There are photos of two-year-old me not only applying makeup on myself, but also on my Granny who cared for me while my parents worked. I’ve done makeup for people’s weddings on occasion, too. I just love the stuff.

I used to be pretty bent on MAC, but over the years, I’ve diversified and have love affairs with everything from Giorgio Armani’s cosmetics to COVERGIRL. Brands don’t universally make the best products as a whole; I find that you need to look for what works best for you within several lines — and just stop worrying about whether everything in your makeup bag matches. (I know, I know: that last part is really hard sometimes.)

I’ve been using SST Cosmetics’ new POWERPLAY POWERSTAY sticks for a couple of months now, and I’m really excited to tell you about them. 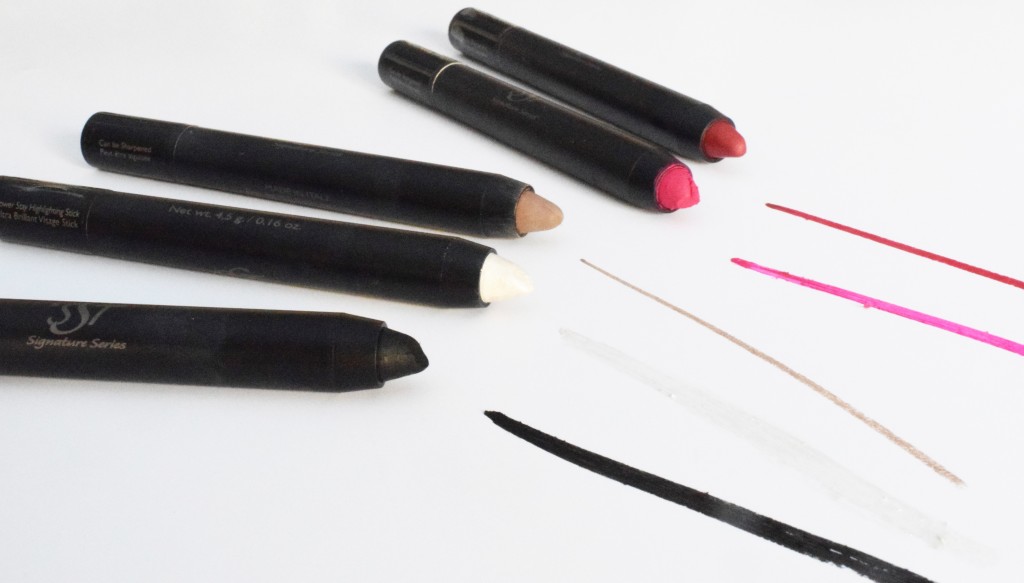 As someone who travels a fair bit, and always commits to using only carryon luggage, being able to pack five compact sticks that take the place of lipstick, blush, eyeshadow, eyeliner, brow liner and highlighting powder(s) is HUGE. Not to mention the number of brushes I now leave at home. I couldn’t believe how space-saving these POWERPLAY POWERSTAY guys were the first time I packed for a trip. Now, I just add a bottle of foundation, concealer, lipgloss and — if I’m feeling extra-fancy — some mascara for my lower lashes (since my uppers are swathed in extensions) and I’m on my way with far less bulk.

The pigments are strong and true. They go from stick to face and the colour stays consistent. They’re also really long-wearing (in the case of the “plank” shadow stick, sometimes TOO long-wearing…I’ll get to that), so you won’t need to worry about re-applying your makeup from one hour to the next. I even use the shadow stick on my waterline and it stays put better than any other eyeliner I’ve ever used. In fact, the highlighting stick has replaced the pigment powder I’ve been using for the last decade, because it goes on easier and lasts longer.

Here I am wearing a face done ONLY using these POWERPLAY POWERSTAY sticks from SST (atop my beloved Armani foundation, that is):

Playing with @sstcosmeticsinc Power Stay Sticks today, which will be fabulous for #travel because they’re so compact. Other than foundation (@armani), I’ve used only #SST’s #brow pencil (colour: Form), lipstick (Willpower) on cheeks and lightly on lips mixed with @arbonne’s #Genius Lip Treatment, the shadow stick (Plank) for shadow and liner with @covergirl #mascara on lower #lashes and #eyelashextensions up top, along with a bit of the highlighting stick (Glisten) on my brow bone and Cupid’s bow. The lipstick goes on VERY bold if you don’t pat it on your finger first, which I love but not at 9 AM. #cosmetology #cosmetic #cosmetics #beauty #makeup #makeupoftheday #selfie #selfies #beautyblogger #beautyproducts #myface #nofilter

And here I am having used the brow liner, shadow stick, highlighter and the lipstick in “euphoric” as blush; but I used my normal foundation and some shimmery Guerlain lip gloss instead of trying for bold eyes and lips at the same time:

So, lots of different looks are achievable using just the sticks or by combining them with other makeup products you already have.

The SST brand is Canadian. Love that. So much.

The five-piece makeup line is completely free of chemicals, gluten and cruelty. Win, win and win. Especially the chemical-free part, because — HELLO! — this stuff is going on and sometimes in your eyes if you tend to line your waterline as I do. You don’t want the nasties near your eyes.

SST’s POWERPLAY POWERSTAY collection is available online and in 70 salons nationwide, making it easy to come by when you run out.

Although they’re sticks and will probably last several months, $27.95 may feel steep — especially if you’re purchasing all five. That said, if you’re used to buying higher-end makeup, this is par for the course. No sticker shock for me personally.

Let me preface this statement by saying that the SST shadow stick is easily my favourite stick in the bunch. I use it all the time as eyeliner and eyeshadow. But, boy, does it stay on. Like, for days. Even with good eye-makeup remover, I’m always sporting what looks like an eyeliner tattoo on my lower eyelids for a good three days after I wear it. On the upside, at least it looks good as it fades.

There are still limited options in terms of colours. If you want a dark brown liner or shadow for example, it’s just not available. Same goes for a lighter pink or more natural lip hue.

« Fern Resort in Orillia, Ontario
The day I struck a #PoisePose with Brooke Burke »