I have directional issues.

I’m that person who will be walking in one direction in the mall, go into a store, walk back out not five minutes later and not know which way to turn.

Put me in a foreign environment, and I’m completely disoriented. It took me at least three years of driving in Toronto to not get lost during every single outing. Everything looked “north” to me unless I could actually see the lake.

I am basically the poster child for GPS.

And when I bought my first TomTom (the One XL) back in 2007, I couldn’t imagine life without it. When that GPS device kicked the bucket, some sales rep at The Source talked me into a Garmin Nuvi. I stopped using GPS as much once I moved to a tiny town and knew my way around – not to mention the suction cup stopped working entirely on the Garmin and it would LEAP out at me while I was driving as it plundered down, down, down into the recesses of my console.

When my colleague mentioned that we had some TomTom VIA 1605 units available (the PR firm for which I work represents TomTom), and I was excited to get a GPS that didn’t have a death wish. 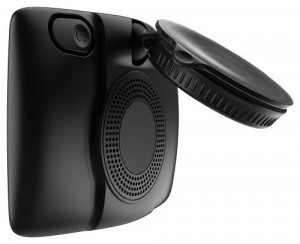 Not just any old suction cup…

I’m going to start with the suction cup, which might seem odd since it has nothing to do with the technology in the TomTom VIA 1605. But TomTom has engineered this part of the device very intelligently. Gone are the days when you need to shove your GPS into a holster and stick it on your windshield. Now it’s a simple flip-up suction cup with a “dial.” Dial it one way to lock it in place; dial it in the other direction to break the seal. Dial it back again and it serves you a glass of Chardonnay. OK, that last part is a lie.

The TomTom VIA 1605’s screen is enormous at six inches. It’s not much smaller than my kids’ DVD screens, and that makes it easier to glance at quickly to get the information you need. After all – size matters, right?

The touch screen works quite well. Don’t expect it to be nearly as sensitive as your iPad or iPhone, but it generally gets it right every time I punch something in. You just have to take your time. Please remember that you’re only legally allowed two “touches” every minute if you’re driving, so be sure to set your destination before you get moving. 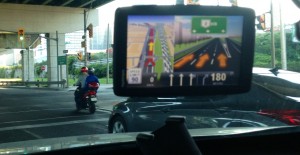 Coming up to a fork in the road, the TomTom VIA 1605 TM screen splits and arrows appear, telling me to stay to the left. (I swear the light was red when I snapped this picture.)

I’m in love with the free updates. One of the things I really disliked about my last two GPS devices was that you had to pay to get updates on new streets and routes. Not so with the TomTom VIA 1605; it comes with a “code” that gives you free updates for life and all it requires is that you download some software (which was quick and easy) and plug in your unit every once in a while when you get an update alert. Connect it via the provided USB cable and off you go.

Being directionally challenged also means that following what should be simple instructions on a GPS screen often causes me a bit of anxiety. I often question which fork in a road I’m supposed to take or inaccurately interpret the number of metres left before a turn and miss it. I’ve found the TomTom VIA 1605 easier than either of my previous devices, especially when it comes to veering versus turning. This GPS actually offers a split screen when you’re coming to a fork or a “veer,” and displays three big, flashing arrows to indicate which way to veer. I find this incredibly helpful, and I’m pleased to report I have yet to take the wrong fork.

I don’t like the way you need to insert the charger into the device. It feels awkward – backwards, almost.

Polarized sunglasses pose a problem. I’ve been wearing polarized lenses for a decade and I infrequently have screen issues. There’s one TV in the underground viewing pathway for the polar bears at the Toronto Zoo that looks all crazy if I wear my glasses, and then there’s this GPS device, which I can’t see very clearly while wearing my sunnies. I sometimes have to push them up and off if there’s a critical instruction coming. And that’s a bit of a problem since they’re prescription.

The in-map navigation could be more intuitive. What I did like about the Garmin Nuvi is that you could just tap along the top while you were in transit to see a list of the upcoming directions. Then you hit “back” and it took you back to the map. You’d think after trying to do something similar with the TomTom VIA 1605 at least a dozen times, I’d be able to efficiently recreate the steps it takes to get me into the list of directions and back to the map. Not so. Not yet.

DISCLAIMER: As noted in the intro, I work for the PR firm that represents TomTom’s GPS devices. Like always, I am in no way coerced, encouraged nor is it remotely suggested that I write a positive review. I write positive reviews when products earn them. We have also represented The Source, but it was not a client when I purchased the Garmin Nuvi.