Despite living in the UK for two years, I didn’t make it into mainland Europe beyond Paris and Amsterdam.

I have a long list of countries I still want to visit, but Spain and Italy have remained near the top for two decades. For me, they represent the architecture, history, culture, food and lifestyle that is quintessentially Europe. (Even if that’s completely inaccurate in actuality, that’s how my mind’s eye sees it.)

But there’s one place in Spain that I’ve desperately regretted not visiting for nearly 18 years: Ibiza.

But, oh my God…I’m 41 years old. I didn’t think this aging mature body could have handled three nights in party central. Good thing Ibiza turned out to be the surprise of a lifetime. And an equally good thing that we stayed in the quiet, upscale IBEROSTAR Santa Eulalia — in a beach town, which is a solid 30 minutes away from the raging nightlife for which this small Spanish island is known.

Pssst! Be sure to check out all the things I recommend you do (and eat!) when in Ibiza, a.k.a. The White Isle. 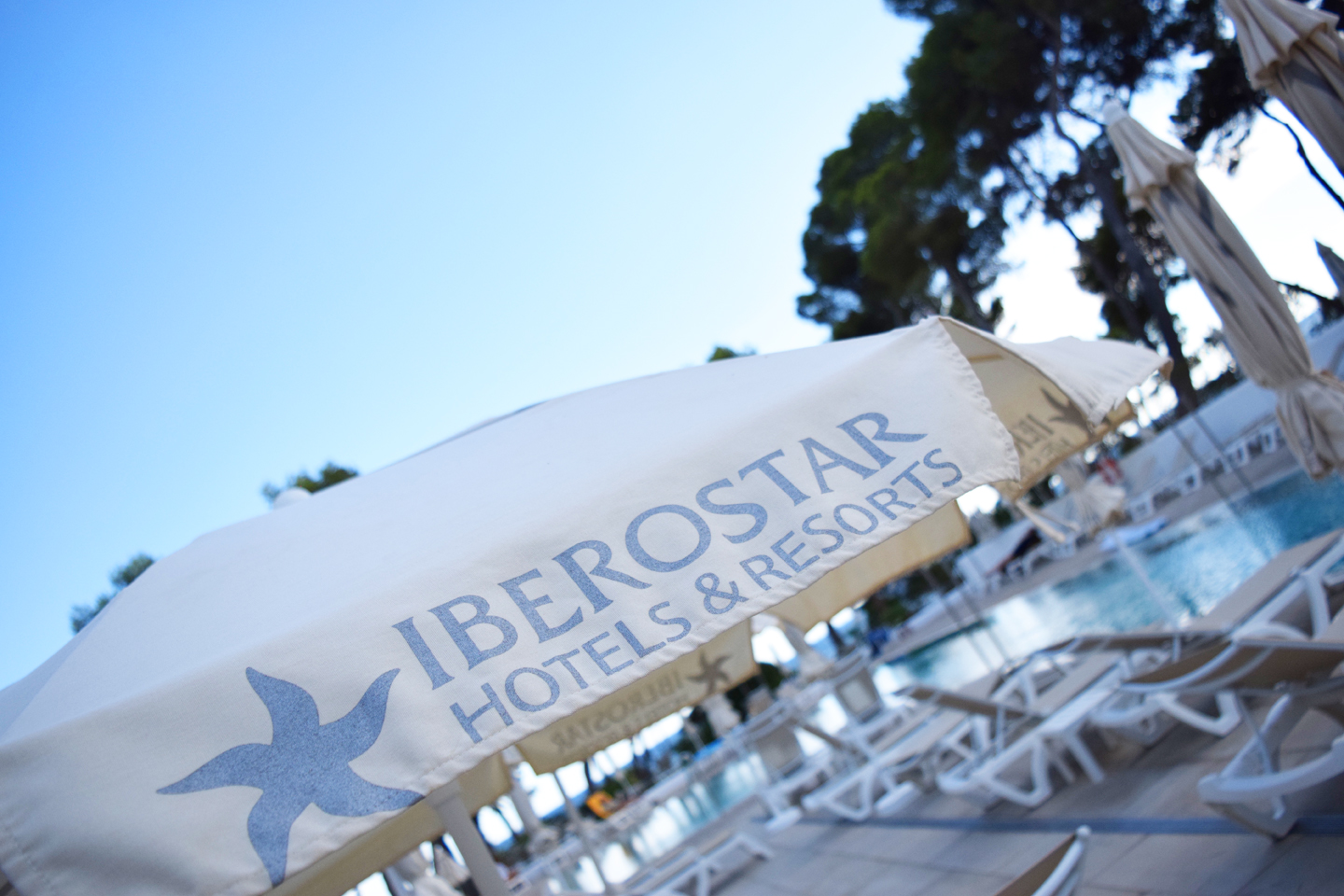 The IBEROSTAR Santa Eulalia is brand spankin’ new. And as you’d expect with a five-month-old hotel, everything is still fresh and crisp and perfect. There isn’t a fallen paint chip to be found anywhere. Everything from the towels and linens to the sun beds are pristine. What you might not expect with such a new operation is that the service and food would be so spot on this early in the game – and they were. Although it may be considered a four-star, it offers five-star service. In fact, I’ve stayed at so-called five-star properties that couldn’t hold a candle in many respects to this hotel.

The décor is stunning. Very Miami Beach. Like all other buildings in Ibiza, the exterior is white (by law), but it’s this way inside as well, making it bright and airy. 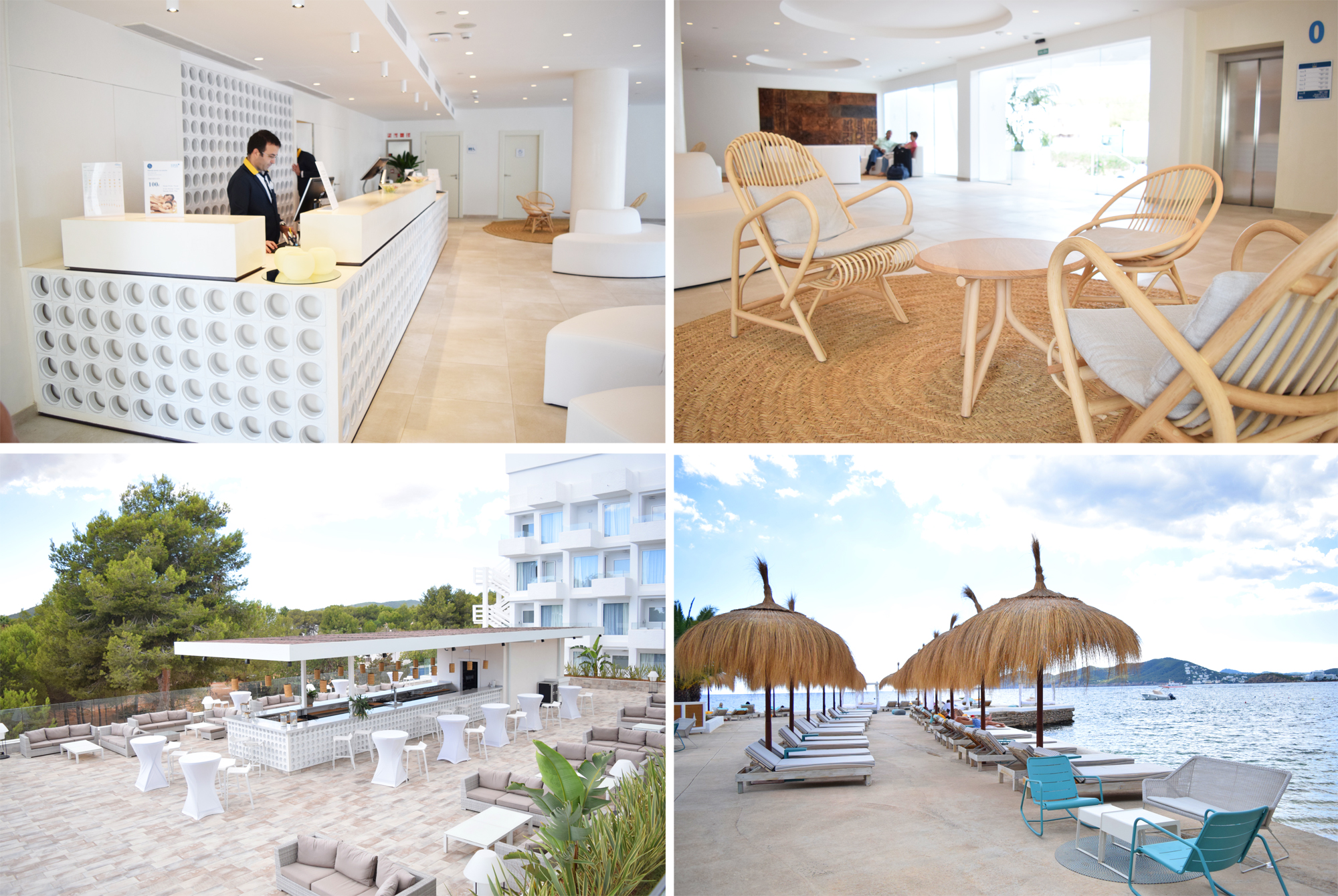 The bedrooms could be the set of a Ralph Lauren photo shoot: all white with accents of light blue searsucker.

Many of the rooms at the IBEROSTAR Santa Eulalia have outstanding views. Mine looked down onto the patio bar, and a little farther to the left, the pool; I could see the sea, too, which was lovely. 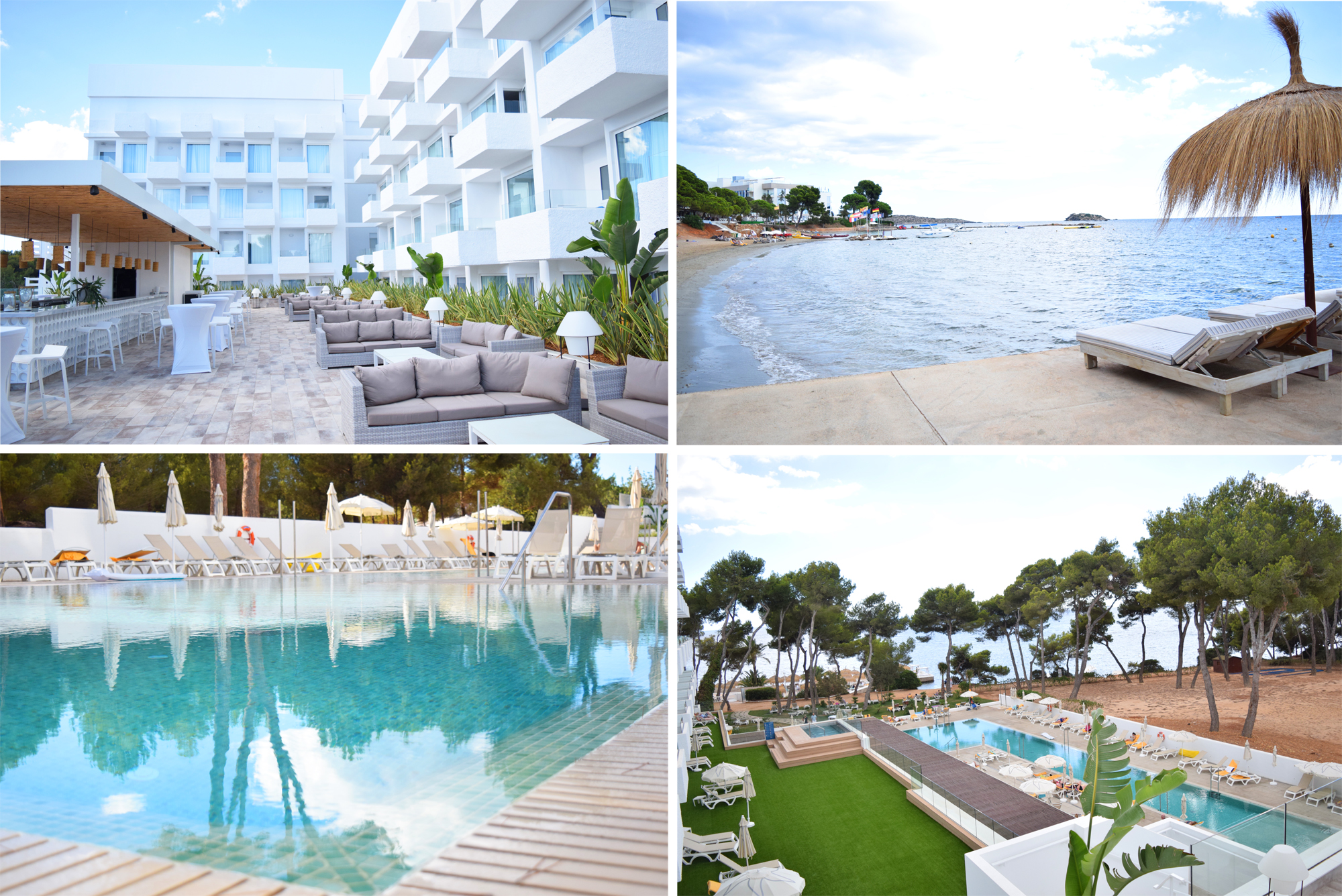 The teak loungers and sunbeds at the SeaSoul Beach Club onsite are, well, amazing. They’re for rent only but that does keep it pretty quiet and provides a more exclusive feel if that’s what you’re after. I loved the stairs that took me from sunbed to the sea without having to get in via the beach. This is not like the ocean in the Caribbean – there are things growing from the seabed that I was very happy not to have to touch with my bare feet. Deeper in, it was just lovely, refreshing salt water. And then back to the sunbed for a cocktail. (It was clearly a very rough few days…)

The food at SeaSoul Beach Club (onsite) is outstanding. Everything we tried was excellent. I can’t say enough about its food and cocktails. Just wow. 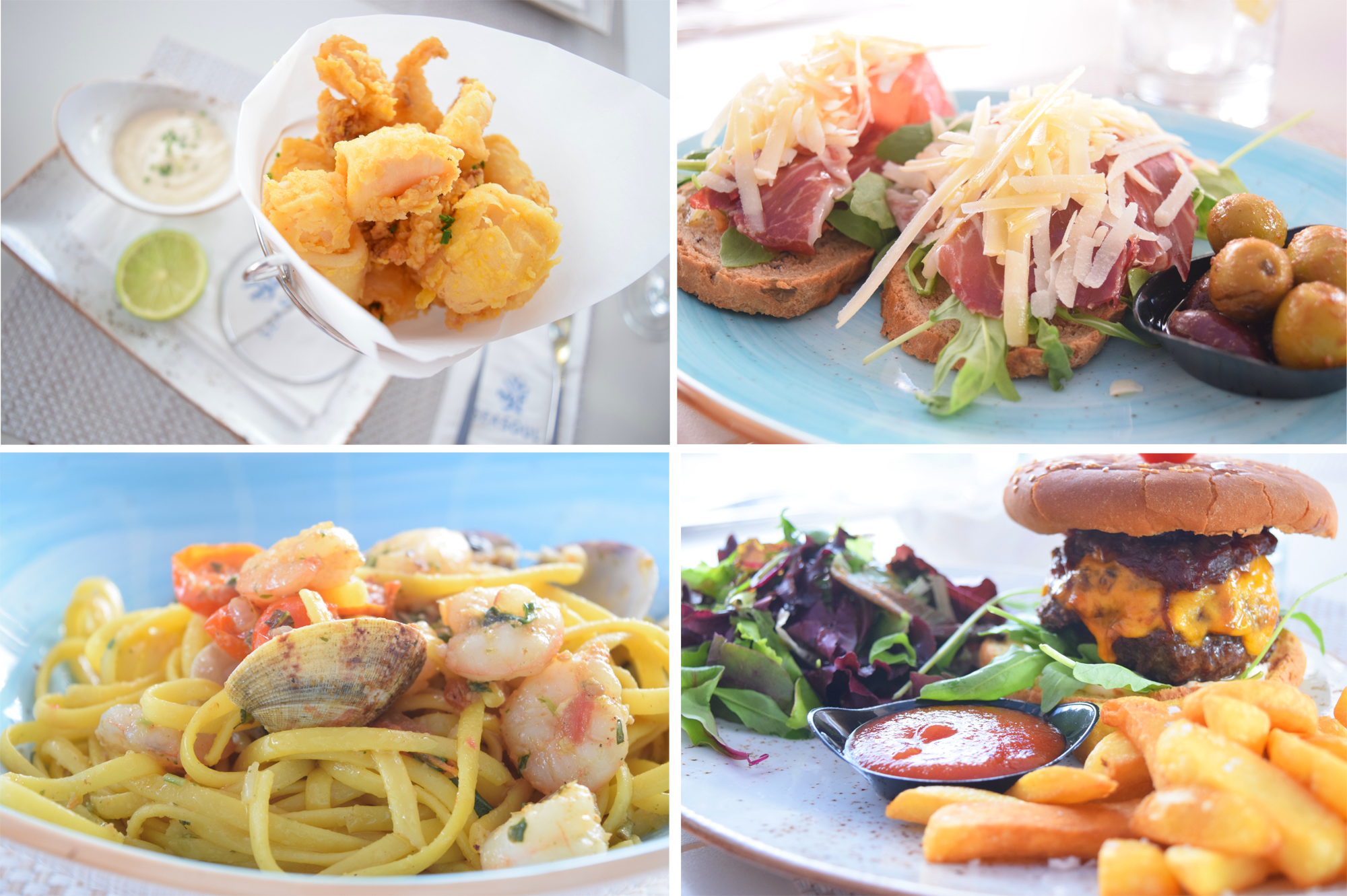 The buffet in the hotel was good (even if it didn’t knock my socks off, for a buffet it was more than edible). It offered a lot of variety, the food was cooked and presented well and the hours it was open were very good for travellers who wanted to sleep in or eat dinner late. Breakfast is included with your hotel stay (order the café con leche – coffee with steamed milk – to your table; it’s excellent) and although there’s currently an all-inclusive option for lunch and dinner, that may go by the wayside in 2017. Trust me, you’ll be happier eating at SeaSoul anyway.

The grounds, the pool, the bar – all beautiful. I loved how secluded the IBEROSTAR Santa Eulalia felt, even though we were within walking distance to other hotels and activities.

The spa was intimate and cozy. I only had a 30-minute massage there, but I liked the tranquility and the service was very good. 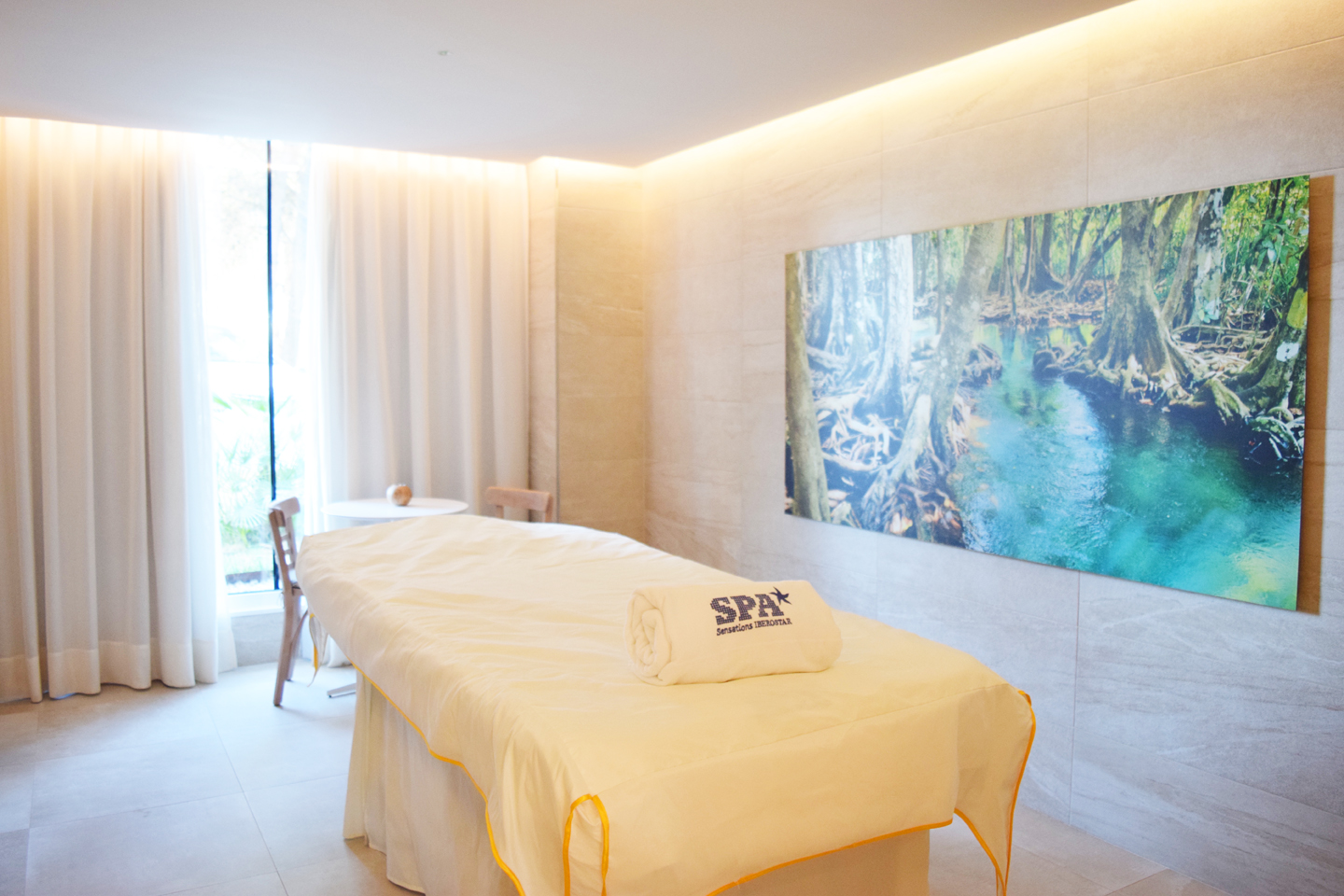 I also loved that it was adults only. Even though Ibiza turned out to be much, much more than just clubbing, I probably still wouldn’t bring my kids there. And because of that, I don’t really want to have kids around at all. Because I love mine – not yours.

There’s some form of entertainment every night, from reggae night to a large outdoor movie screen propped up across from the pool loungers; this is great if you want a dose of nightlife without needing to leave the comfort of the resort.

Did I mention just how darn pretty the IBEROSTAR Santa Eulalia is? I would absolutely stay there again.

In terms of pricing, it’s pretty on par with the rest of the island for high and low seasons. In July and August, you can expect to pay 200 to 350 Euros a night, while it may dip as low as 100 to 150 Euros per night in June or September.

The rooms are on the smaller side – even the biggest “suite” is going to feel small for someone who isn’t used to European standards. IBEROSTAR is spending the off-season adding more rooms on the top floor, so hopefully it will add a few actual suites that would be more in line with North American expectations.

Similarly, a couple sharing a standard room are going to find the bathroom small(ish). Showering together will not be an option and it’s standing room only for one at the mirror. Forget it if you’re sharing with a girlfriend and you both need to do your hair and makeup at the same time. (Good news: IBEROSTAR will be adding hair services at the spa next season.)

My safe didn’t work. I didn’t bother to ask to have it fixed but instead just put the “do not disturb” sign on my door throughout my stay. I left with everything intact. And anytime I needed something, like fresh towels, it was a phone call away.