The Build-A-Bear Merry Mint Pup is featured in part three of my holiday gift guides.

This guest review is written by Christine who has one child, Little One (a very “spirited” preemie who just turned four years old). A  teacher by profession, Christine is now a social media maven. She works from home for the most part and you may know her well if you tweet with PTPA from time to time – she’s the community manager. One of Christine’s absolute favourite things to do is cook (she’s addicted to the FoodNetwork!) and bake…and FEED people! Funny enough, she was a city-living vegetarian for most of her adult life and ended up marrying a beef farmer. Christine shares her misadventures with readers on her popular blog Life on Manitoulin.

I’m not going to lie.  One of the things I was really excited about when I discovered I was pregnant with Little One was that now I had an excuse to buy adorable baby and kid items.  Every time I went shopping, I’d see so many amazing products that were “must-haves” and so practical.  I also saw many not-so-practical, but super cute items. Nonetheless, I was in awe at how many products there are for babies and children.

One store I always passed and was curious about was the Build-A-Bear store.  I secretly wanted to make a Build-A-Bear friend for MYSELF! Shhhhh! Don’t tell anyone!  Much to my husband’s chagrin, I’m a big fan of adorable stuffed animals. No, in case you’re wondering, I am not an obsessed stuffed animal collector. This said, I do have (I mean Little One has) an impressive collection.

For her second birthday, Little One and her BFF went to Build-A-Bear. My friend and I let the girls choose their cuddly friends. The girls both chose the exact same kitty and the exact same outfit. Both being really into ballet, they chose matching ballerina kitties! The fun part for the girls was making their Build-A-Bear friends and customizing them.

Mommy Gearest recently asked us to review Build-A-Bear’s Merry Mint Pup. Included in our review package were a festive dress and matching shoes.  Little One’s reaction to the clothes and shoes was kind of funny, actually; she looked at them and said, “Mommy, why does my doggy have clothes and shoes?” 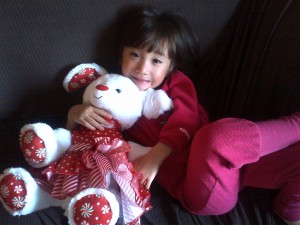 I have to say that it was love at first sight.  I really wish we had captured the moment Little One opened the box (which is actually more like a mini-house, if you’ve never seen one) and found her new friend. The squeals and smiles were priceless. Bonus: the pup also came with a scented bone.

Build-A-Bear’s Merry Mint Pup is simply adorable. Soft, cuddly and festive, Little One was absolutely enamoured by this stuffed animal because “She’s so cute and cuddly, and sweet!” With candy swirls on its ears and paws, this puppy puts everyone in the holiday mood. I have to say that the quality of Build-A-Bear’s stuffed animals is great. As moms know, quality toys that stand up to the sometimes (cough, cough – often) rough treatment by little ones, quality is so important for the longevity of the toys.

Little One has been having tea parties with her new friend and she brings her everywhere. She brings her to the grocery store, the bank, the post office. This really is a lovable companion for little ones.

With the holidays fast approaching, Merry Mint Pup is a great gift idea. I had a friend over the other night and she saw Little One’s Merry Mint Pup. She is now getting one to put under the Christmas tree for each of her children. Actually, I think she’ll be taking her two kids to Build-A-Bear to make their own. Merry Mint Pup definitely makes a great holiday keepsake.

The one thing that my little one had problems with was that the shoes kept falling off the puppy’s feet. She got frustrated and just took the shoes off. Now, I have no idea where the shoes are.

The dress has Velcro at the back to fasten, and that’s great for Little One to dress and undress her Merry Mint Pup. This said, the dress is now somewhere with the missing shoes! I have a tiny kid who really loves putting clothes on her toy friends, but she really likes taking them off and driving Mommy crazy. Can I tell you how many naked toys I see around our house?

The plush bone that comes with the pup is supposed to be scented, but ours didn’t smell like anything. The only reason I knew the bone was scented was from the description I read on the Build-A-Bear website. Ours didn’t have even the faintest scent. It’s a great idea though. I’m not sure why ours didn’t have any fragrance at all, but I imagine that if it did, it would be an added “treat” for any kid who receives this toy!